I was looking in my cupboards last week trying to decide what sounded good as a side to make with our leftover chicken.  I found a box of scalloped potatoes and thought, hmm I should use up our real potatoes, I wonder if I can find a really good cheesy potato recipe.  The search was on.  I found this by The Pioneer Woman and immediately wanted it.  But alas, we did not have heavy cream nor whole milk and it was not worth the trip to the store.  So I scoured the internets, asked for some help with a sour cream alternative.  And with a little input and a little guess work, the most amazing potatoes came about.  (I will still say that I prefer cheesy potatoes made with hash browns but these were AWESOME!)

5 cubed Potatoes
½ cup butter,
1 can Cream of chicken soup
1/3 cup Onion
1/2 cup milk
1 ½ cup Grated cheddar cheese
1 1/2 cups Sour cream
1 clove garlic finely chopped
sprinkle of salt
sprinkle of pepper
First, I preheated the oven to 350, I would recommend actually doing it at 400.  Our potatoes were still too firm, but edible, but I would definitely cook them higher and longer than I did so here is your warning now. I washed and scrubbed the potatoes. 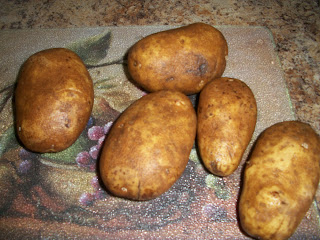 Then I chopped them up.  It was easy to cut them in slices and then chop them into 4ths. 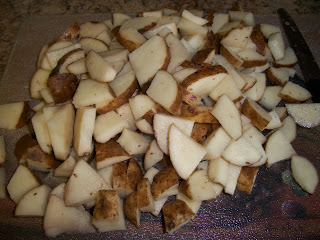 Use 2 tablespoons of the butter to coat the bottom of the pan.  I think there was maybe a bit too much butter so maybe instead of a full stick take away 2 tablespoons from it? 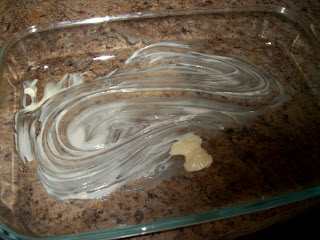 ﻿In a saucepan, melt the rest of the butter and then add in the sour cream, cream of chicken, onion, garlic, salt and pepper.  I made sure it was all stirred in and then added the milk because it seemed to thick. 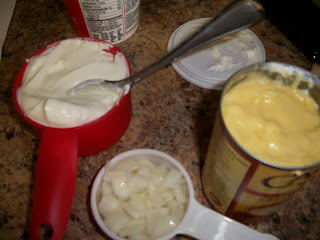 I left it in the pan basically to warm up and mix together and then I added just a handful of shredded cheese I had left in a bag from the fridge.  Next time, I would probable do twice the amount you see here. 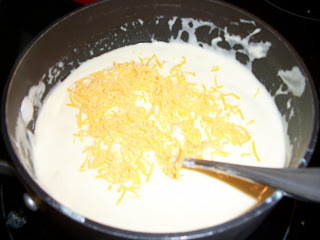 While that is warming up, put 1/3 of the potatoes on the bottom of the pan.
﻿ 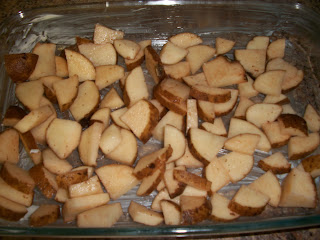 Then cover it with some sauce. 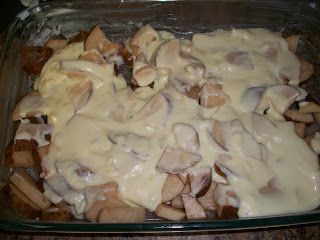 Then do this two more times, potatoes, sauce, potatoes sauce.. Ending with the sauce. 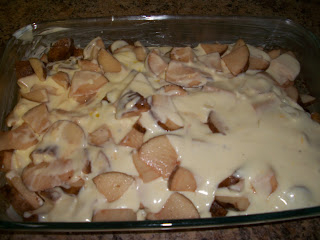 Now, cover it up with tin foil and put it in the oven for 30 minutes.  Then take it out and remove the tin foil and cook it again for 20 minutes or until the potatoes are golden brown and really bubbling.  I
may have not cooked them this long and regret it but they were still good but my husband was more patient and put them back in and it they were better. So make SURE THE POTATOES ARE HOW YOU LIKE THEM!
Then use the lovely cheddar cheese that you shredded or from the bag. I used a combo of freshly shredded and bagged. 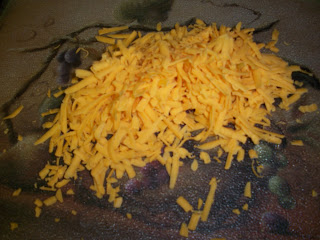 Then cover the dish and put it back in the oven for about 5 minutes. 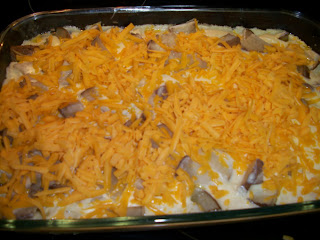 And then it will come out looking like this. And you will have to try to not burn your tongue.. whoops. 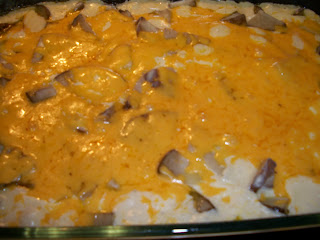 And then you put it in the bowl and eat it.  And I hate like double this amount in the end. SO FREAKING GOOD.  I ate it as my meal but my husband had the leftover chicken haha. 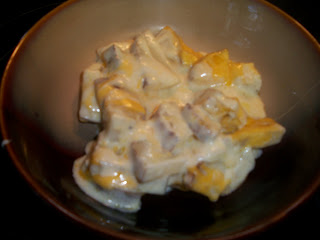 ﻿
Verdict? AMAZING. Definitely recommend it.  NOM NOM NOM NOM NOM
What is your favorite way to eat potatoes?
Mine is a tie between cheesy potatoes and potato soup!
Posted by The Many Thoughts of a Reader at Thursday, June 02, 2011