I was given the opportunity to read and review, A Place Called Jubilee by Timothy J Garrett.  I was intrigued by the description:


"Deception, witchcraft, and the secrets of a long-dead former slave churn the life of ambitious young clergyman Coleman Hightower – even as fear, bombings, and riots rock the nation. Timothy J. Garrett’s historical novel A PLACE CALLED JUBILEE tells Coleman’s story as he leaves his mountain home and arrives in Washington D.C. in 1961 as the Civil Rights movement explodes across America. Coleman’s plans for a prestigious life are torn apart by his forbidden longing for beautiful and fiery activist Rosalee. His search for meaning turns into a desperate journey that takes him and the woman of his dreams all the way to Jubilee, Alabama – a place where intrigue, betrayal, and murder combine to make Coleman wonder if he will win Rosalee’s love or even leave the tiny town alive. "

The book does change time and place between chapters (easy to follow and each chapter tells you the time and place) but the majority of the story takes place following President Kennedy's 1961 inauguration that Coleman witnesses.

The reader is introduced to Coleman and the rough childhood he had in the mountains.  He was raised by is Granny who we are told was a conjurer and his rough and stoic father.  His granny always told him e would be 'more' and he was able to break out of the mountains and attend college.  Following college he moved to Washington D.C. to learn from a pastor and to one day have his own church.

However, following the inauguration, Coleman is almost killed and is saved by a young woman who changes the course of his life.  Rosalee makes Coleman question all that he thought he was going to do with his life.

She is heavily involved in the civil rights movement and this intrigues Coleman.

Another life altering moment occurs and Coleman is faced with a choice, Rosalee or becoming a prominent pastor.

There are a few twists and turns and a little magical realism that just kind of muddles things a bit and a lot of talk about civil rights, relationships between black and white people and the treatment of black people by white people.  There is heavy use of the 'n' word.

If you would like to win a copy of this book check out the Rafflecopter below.

I was given a copy of this book for review, all thoughts and opinions are my own.

Posted by The Many Thoughts of a Reader at Thursday, March 05, 2020 No comments:

What I read in February

My reading in February was kind of funny.  I did most of it on the weekend.  I don't know why, but usually during the week, specifically during the day, it feels weird to just read.  Now if I am on a deadline for book club or if I just HAVE to know 'who did it' I will sometimes read during the week day, but for the most part I read a lot in the evening and on the weekends.  All of these books were read practically all in one day chunks.  On the weekends.  I've already read differently than this since March started, but it was interesting to see that fact of February.  Which, I read far more THIS February than last, when I only read 3 books as I was in the throes of morning/all day sickness! 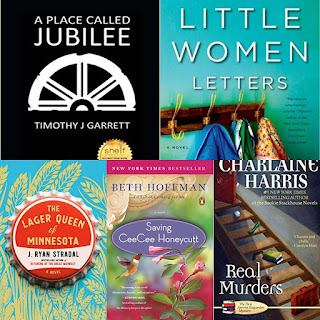 Real Murders is the first book in the Aurora Teagarden series by Charlaine Harris, who wrote the Sookie Stackhouse books. She's written others, but I honestly only knew she wrote those until I found Aurora Teagarden on Hallmark!  The book vs. movie has a ton of differences.  I watched the movies first and the read the books.  If I could pick, I'd have read the books first because there are some significant character differences and it makes it hard when the movies were fresh to readjust to the book!  Aurora is a small town librarian who is in a club called Real Murders Club.  They like to discuss real murders and murderers.  In this book, someone is stalking members of the club and setting up them up for murder!  These are a really quick read and a very cozy mystery feel.  If you like Amanda Flower mysteries, I'd check out this series.

Saving CeeCee Honeycutt is a re-read.  As when I read it the first time, I devoured it.  Highly recommend if you need a good story.  There is some sadness, but the overall story is just a good story, full of funny, strong female characters.  If you enjoyed The Help, Dollbaby, or Gods in Alabama, I'd recommend this book.

The Lager Queen of Minnesota was another book I really enjoyed.

"A novel of family, Midwestern values, hard work, fate and the secrets of making a world-class beer.
Two sisters, one farm. A family is split when their father leaves their shared inheritance entirely to Helen, his younger daughter. Despite baking award-winning pies at the local nursing home, her older sister, Edith, struggles to make what most people would call a living. So she can't help wondering what her life would have been like with even a portion of the farm money her sister kept for herself.With the proceeds from the farm, Helen builds one of the most successful light breweries in the country, and makes their company motto ubiquitous: "Drink lots. It's Blotz." Where Edith has a heart as big as Minnesota, Helen's is as rigid as a steel keg. Yet one day, Helen will find she needs some help herself, and she could find a potential savior close to home. . . if it's not too late.Meanwhile, Edith's granddaughter, Diana, grows up knowing that the real world requires a tougher constitution than her grandmother possesses. She earns a shot at learning the IPA business from the ground up--will that change their fortunes forever, and perhaps reunite her splintered family?Here we meet a cast of lovable, funny, quintessentially American characters eager to make their mark in a world that's often stacked against them. In this deeply affecting family saga, resolution can take generations, but when it finally comes, we're surprised, moved, and delighted."

I honestly cannot believe that the dad cut the one daughter out of the will and there was no discussion!!! But that is the midwest for you.  Don't talk about the uncomfortable and ignore! This book was funny , quirky and also had lots of strong female characters! If you like the Elmwood Springs series by Fannie Flagg, I'd recommend this book!

Little Women Letters is a modern day take on Little Women.  The sisters in this book are related to the Little Women from the Louisa May book.  One of the sisters finds letters from Jo to her sisters and it comes at a time in her life when she needs to make some decisions.  It was cute, but I wouldn't recommend it unless you've read Little Women, otherwise, it wouldn't have as much meaning/connections. If you liked Little Women, then yes, definitely read this book!

A Place Called Jubilee is a book I received for a review (coming tomorrow!).  It is about a man, Coleman, who is living at a rectory intent on becoming a minister when the inauguration of JFK spurs a bunch of changes in his life.  It has deceit, mystery, the hint of unknown forces, racism, civil rights, love, and a mystery.  It's a fairly quick read with some in depth descriptive writing.  If you liked The Third Hill North of Town, I'd recommend this book.

I've already finished 2 books in March and I got a good stack from the library! The eight year old and I signed up for our library's March is reading month challenge to read at least 20 minutes a day using the BeanStack app.  Here's to hoping I can remember to log us in and remember to track it on the calendar from her school!

What was your favorite book read in February? Any recommendations to add to my list?
Posted by The Many Thoughts of a Reader at Wednesday, March 04, 2020 No comments: