What I Read in November

I am in a position I haven't been in a few years, racing to finish books by year end! I upped my yearly goal and it's really stretching me at this point in the year.  I had a few stretches where I went a bit longer between books and some books that I should probably have abandoned sooner taking too long.  Even though this year will probably be the biggest year of for me with DNFs.  Let's see if I can crank out 11 books in December! 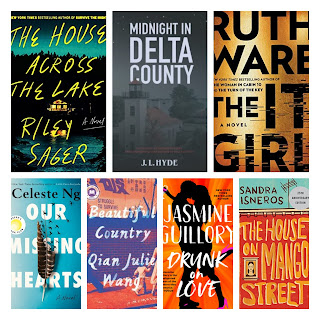 Drunk on Love - I will read anything Jasmine Guillory writes.  She is funny and writes modern day relationships.  This book is about a winery owner who finds out her one night stand is her new employee.  Ooops.  Hilarious and a page turner that I finished in a day.

The IT Girl - The very first book I read by this author I was like okay, I need to read all of her stuff.  Then I was disappointed a couple times but THIS book was so good.  Hannah’s college roommate was murdered 10 years ago and the convicted killer just died in prison.  He adamantly swore he was innocent but Hannah SAW him leaving as she was entering the building.  The book goes back and forth before and after.  You meet her friends and the victim and join Hannah on a race to find out, did the killer do it? Or was it one of her friends?

Midnight in Delta County - This is a sequel to Delta County and The Summer of ‘99.  HIGHLY recommend all three.  The author is a CMU grad and a Yooper.  This book is another page turner of who is behind the murders in Escanaba that are very eerily similar to the fictional book Quinn Harstead just wrote.  People start thinking that Heather might be behind them because isn’t that character in Harstead’s book just a tad bit like her? Once a killer and all… Or is someone messing with both Quinn and Heather with a deadly motive?

Beautiful Country - Memoir about leaving China and moving to New York as an undocumented person.  Heartbreaking retelling of the author’s childhood.  Highly recommend it.

The House Across the Lake - Was a page turner with an unreliable narrator. Casey was widowed recently and after a few too many public oopsy, her mother 'banishes' her too their family lake house, where her husband died the year before. She finds binoculars and starts spying, as one does and finds that her neighbors may have things to hide and one may have a motive for murder. Then there is the other guest staying next store, is he dangerous? Casey keeps drinking and the wife across the lake disappears. What happens next keeps you turning the page. I had a few eyebrow raises at some supernatural elements towards the end of the book, but overall it does its job!

Our Missing Hearts - I'm sad to say I was disappointed by this one. I had a hard time getting into the first half of the book, the second half when it switched narrators and had the action pick up made me push through!

"Twelve-year-old Bird Gardner lives a quiet existence with his loving but broken father, a former linguist who now shelves books in a university library. Bird knows to not ask too many questions, stand out too much, or stray too far. For a decade, their lives have been governed by laws written to preserve “American culture” in the wake of years of economic instability and violence. To keep the peace and restore prosperity, the authorities are now allowed to relocate children of dissidents, especially those of Asian origin, and libraries have been forced to remove books seen as unpatriotic—including the work of Bird’s mother, Margaret, a Chinese American poet who left the family when he was nine years old."

The House on Mango Street - A collection of vignettes that tell a story of a young Latina girl growing up in Chicago.  I'm glad I finally read it, but it wasn't written for me!  Beautiful prose.

What did you read in November? Are you planning on reading any holiday themed books?

Posted by The Many Thoughts of a Reader at Tuesday, December 06, 2022 No comments:

A Look at November Goals

I re-started concentrated working out in November after starting off strong after the oldest went to school until the illnesses of the school year started and then I got off schedule.  So I made myself a few goals and kept track.

Soo.. started off hot.  Got 4.05 and 4.09 the first two weeks and then the weather took a poop and I had to strategically use the treadmill and I can't use it too many days in a row or it hurts my legs.  So then I finished with 2.02 and 3.46 since I haven't walked since Thanksgiving morning.

I read 7.  The only reason I have books as a goal right now is that for the first time in awhile I am off my goal set for the year, which is because I finally raised my yearly goal again after easily completing it.  So I decided I have to make a push.  I have a 11 left to hit my yearly goal so here goals nothing in December!

Did it! I take online classes to maintain my licensing and I have to have so many credits per 5 years so I am cranking more out in the next few months so it's not crunch time when June 2024 comes calling.

I did 9.  Which is far better than I had been doing.  I think if I wasn't using nap time for blog posts and finishing that class I may have managed this.

I run a facebook page for our  free library.  I try to get "customers" by posting different books we have in there and other fun book related items.  I posted 11 times.

My friend hosts the Art Every Day Month challenge and I've tried to participate the last few years. Usually by making art with the three year old.  I made 11 posts this year.  Though I did do a lot more water color pictures I just stopped taking pictures.

I have some new goals for December and by clicking publish here I am one step closer to completion!!

What did you accomplish in November?

Posted by The Many Thoughts of a Reader at Thursday, December 01, 2022 No comments: