I cannot believe that it is already the middle of May. I have been working on the same book for like ever.  I am having trouble reading.  But my Words with Friends game is strong! We started Schitts Creek, and I am walking almost daily.  So I mean good things? Also, our school year is getting a week cut off, so that's nice and yet what the eff am I going to do with the extra time in our day???? Mom school starting soon.  Hopefully, we will be able to leave our house by then and I can at least take us on outdoor adventures places, or even to my parents house.

The high of my week was dropping off moving boxes to some friends and a front porch chat.

The low of my week was just seeing how not caring of others so many people are.  And selfishly irritated at how life is changed.

The best money I spent was on a Harry Potter robe for Isla's bday.  I had been going to gift her 2 weeks of summer camp and my parents had gotten her a week of it, but I'm fairly certain they will all be cancelled so I decided I had better get her something to open, and well eff it, we are in a pandemic, the kid can have a ridiculous amount of bday presents for once!

What I’m listening to My Favorite Murder

My plans for the weekend include finishing the darn book.

What are you watching/reading/listening to?
Posted by The Many Thoughts of a Reader at Friday, May 15, 2020 No comments:

I've definitely realized that at this point in time there are books I am flying through and then books that seem to take 10 years.  There is no in between! With that said, I finished 5 books in April. 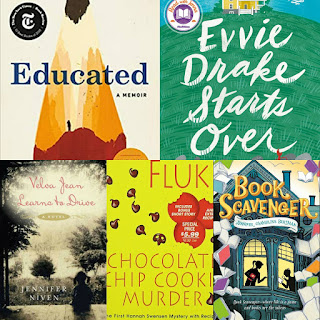 Chocolate Chip Murder Mystery by Joanne Fluke was mostly read in March, but I finished it up in April.  It is the first in a series about Hannah Swenson who owns a bakery in a small Minnesota town.  I found this series because of the mystery series on Hallmark.  Because apparently having a baby and winter and a pandemic have me discovery the world of the past 20 years of Hallmark movies and shows I never paid attention too! I liked that this book had recipes included, and we totally made the Chocolate Chip Crunch? I think that is shared and it was a hit here.  We changed up the type of cereal used because of what we had on hand but they were delicious! If you are looking for a cute series, I'd say check it out! 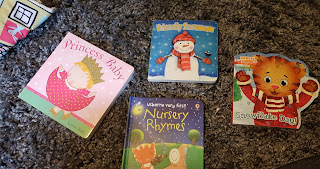 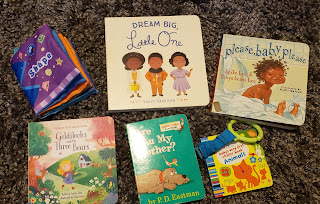 Evvie Drake Starts Over by Linda Holmes is sooo good! I sporadically listen to NPR's Pop Culture Happy Hour podcast,which she is on.  I kept hearing her voice in my head as the lead character, Evvie.  It has such a quick witted dialogue and is a very fast read.  Highly recommend it if you need something to quickly engage in.  It's not an extremely happy book, Evvie, rarely leaves her house and many people think she is too grief ridden to 'move on.'  She meets someone she tries to 'fix' and along the way they both come to terms with the hand life has dealt them.  Both are hurt and both need to restart their lives and live for themselves.  LOVED the dialogue.

Velva Jean Learns to Drive by Jennifer Niven was suggested to me by Goodreads after I finished my reread of Saving CeeCee Honeycutt.  It is set in the 1930s North Carolina mountains.  Velva Jean is the youngest in a large brood of children that live atop Fair Mountain,which is named after a relative who first settled in the area in the1700s.  The book follows Velva Jean from a very young girl to an 'adult' of 19.  She is very close to her brother Johnny Clay who joins in her a lot of her adventures.  His life dream is to be rich from panning gold and her life long dream is to sing on stage at the Grand Ole Opry.  I would recommend this book but it is NOTHING like Saving CeeCee Honeycutt.  Yes, it is set in the South but that is about it.  It reminded me of Dolly Parton growing up dirt poor and having a beautiful voice in a holler far away from 'civilization.'

Book Scavenger is a middle grade novel that is perfect for kids/adults interested in puzzles and books.  It had a Willy Wonka feel to it, and it was a quick read.  I think any of the 'issues' I had with the book were some simplicity plot lines, that wouldn't bother me if I was in the intended 9-12 year old age range it is meant for! It was one of of the library books my daughter got that I decided to read.  The main character is Emily, and her family is on a quest to live in 50 states.  She love solving puzzles and is in an online community called Book Scavenger where users hide books and leave clues for other people to find them.  They earn points and level up by finding and hiding books.  Her family relocates to San Francsico the home of the creator of Book Scavenger and Emily is excited.  She gets immersed in a very unique puzzle , learns how to be a friend, and it is a neat book with a neat premise!

Educated by Tara Westover was our book club pick for April.  It was a fascinating peak into a life that I can hardly imagine living, let alone surviving.  I had put this book off partly because it was super hyped and then I tend to hate those books.  I have to say I was not impressed.  A friend and I both agreed it was just okay, and if we hadn't already recently read and loved Where the Crawdads Sing and The Great Alone, we would maybe have liked it more.  I just felt like I had already read this story before.  Which it is similar to The Great Castle, if you've read that.  And I think I've read a few books about religious extremists that while disgusting isn't as captivating the millionth time I hear about oppressed and abused women.

What did you read in April? What was a book you'd recommend? Have you read Educated? What were your thoughts?
Posted by The Many Thoughts of a Reader at Wednesday, May 06, 2020 No comments:

So first of all, ANDERSON COOPER IS A DAD and I am a puddle of awwwwwwwwwwww over it.  He has such a good soul.  This week was better than last.  I have been out for a walk every day this week and the warmer temps made a huge difference.  We also have had only a few meltdowns.  But it's Friday and all the school things that haven't been finished need to be finished today, so the day is young!! :) Our first friend has gotten Covid-19, (he is doing well), and our friends grandma passed away from suspected Covid-19. :( All the people in my state that think it's cool and okay to take their weapons and intimidate our legislators and governor in our state capital building can all suck a big fat toe.  Selfish ignorant fools.

The high of my week was Zoom book club meeting and watching Adeline go to town on some avocado!

The low of my week was just thinking of how crappy this summer may end up being after putting so many hopes on it after last year being pregnant and miserable.

The best money I spent was on a baby swing for our backyard.  We never had one with Isla because we live next door to a park, but I don't foresee us going there at all this summer so we needed one for our backyard.

What I’m listening to My Favorite Murder

My plans for the weekend include being outside.. working on raking the yard

What are you watching/reading/listening to?
Posted by The Many Thoughts of a Reader at Friday, May 01, 2020 No comments: