I've enjoyed reading books about women who've lived through the 40-60s.  That generation is fascinating to me.  So close to mine but very different lives. The Bridge Ladies by Betsy Lerner is a non-fiction look at this generation through the eyes and voice of one of its daughters.

Description:  After a lifetime of defining herself against her mother’s Don’t-Ask-Don’t-Tell generation, Betsy Lerner, a poster child for the Sex-Drugs-and-Rock ’n’ Roll generation, finds herself back in her childhood home of New Haven, Connecticut, not five miles from the mother she spent a lifetime avoiding. When Roz needs help after surgery, it falls to Betsy to take care of her. She expected a week of tense civility; what she got instead were the Bridge Ladies. Impressed with their loyalty, she realized her generation was lacking. Facebook was great, but it wouldn’t deliver a pot roast.

Tentatively at first, Betsy becomes a regular fixture at her mother’s Monday Bridge Club. Before long, she braves the intimidating world of Bridge and comes under its spell. But it is through her friendships with the ladies that she is finally able face years of misunderstandings and family tragedy. The Bridge Ladies become a Greek chorus, a catalyst for change between mother and daughter.

By turns darkly funny and deeply moving, The Bridge Ladies brilliantly weaves the stories of the Bridge Ladies, along with those of Betsy and her mother across a lifetime of missed opportunities. The result is an unforgettable and profound journey into a hard-won—but never-too-late—bond between mother and daughter.

I really liked when Betsy went and visited the ladies and asked them questions outside of their Bridge gatherings.  They are all fascinating people and would reveal more when not around the others.  I also found it interesting how non-emotional/touchy feeling the group was, even after being together for so long.  However, I do think of my own grandmother and she was like this as well.  She had a group of friends she'd get together with often and for years and some that were closer than others but maybe only one of them she'd share personal stuff with, but how do I know?  It is interesting how we are more of a sharing age than ever before.

The book jumps from bridge games to interviews and is heavy on bridge.  My favorite parts were the interviews or conversations.  But, I also know nothing about Bridge.  I do recommend this.  It's a fast book that's about relationships and generational differences.

How many non-fiction books have you read this year? Have you read anything recently that you'd recommend?

I received this book from TLC book tours but all thoughts and opinions are my own.

Posted by The Many Thoughts of a Reader at Tuesday, May 31, 2016 No comments: 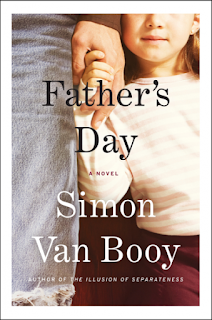 I may be a sucker for a good emotion packed read.  Just from the first few words of the back cover, "At the age of six, a little girl named Harvey learns that her parents have died in a car accident."  I knew I had to try this book by Simon Van Booy out.

Description:
When devastating news shatters the life of six-year-old Harvey, she finds herself in the care of a veteran social worker, Wanda, and alone in the world save for one relative she has never met—a disabled felon, haunted by a violent past he can't escape.
Moving between past and present, Father’s Day weaves together the story of Harvey’s childhood on Long Island and her life as a young woman in Paris. Written in raw, spare prose that personifies the characters, this novel is the journey of two people searching for a future in the ruin of their past.
Father's Day is a meditation on the quiet, sublime power of compassion, and the beauty of simple, everyday things--a breakthrough work from one of our most gifted chroniclers of the human heart.

Harvey and Jason's story alternates between the past and the present, starting with Harvey's life before the accident that left her orphaned and then to present day Paris, Harvey has created a Father's Day box for Jason containing objects that stand for a vital moment in their lives. Each day Jason removes one of the gifts and opens it during their travels around Paris. The gifts then are followed with flashbacks explaining the significance to their relationship. All of the gifts lead up to mysterious revelation Harvey plans to make to her father on his last day visiting.

It's a fast paced book that quickly changes times.  A little long and a little sentimental.  You may or my not need some Kleenex.  Especially in the beginning.  Maybe.  You may or may not get aggravated a time or too.

Basically, a feel good story with a tinge of sadness but a heck of journey to get there. ;)

What do you think of naming a girl Harvey? What is your first impression about a disabled felon being allowed to adopt a 6 year old girl? Have you read any books by Simon Van Booy?

I received a review copy of this book from TLC Book Tours but all thoughts and opinions are my own.

Posted by The Many Thoughts of a Reader at Tuesday, May 17, 2016 No comments:

I love a book where you pick it up and next thing you know you are 100 pages in and you didn't even think you were reading that long! Rare Objects by Kathleen Tessaro quickly sucked me into the world of 1930s Boston.  Maeve is the only daughter of a long widowed Irish woman.  Her mother has instilled in her that she not everyone else and not 'common.'  With a desire to be more she leaves behind a boyfriend and her friends for a new adventure in New York.

Sadly, New York during the depression just wasn't what she had hoped and dreamed. Maeve got into a bad place and ended up in a psychiatric hospital and after her release she went home to Boston with a made up story and friendships to mend.  Boston wasn't doing much better in terms of jobs but Maeve works herself into a very interesting job where her past comes back.

This book was quick and fun.  I liked how it touches on fate and luck and different things that did and didn't happen and actions surrounding them.  If you are looking for a quick fun historical book this one would do it.  Perfect for a quick weekend read.

Do you have a good luck charm? Any superstitions?

I received this book from TLC book tours but all thoughts and opinions are my own!

Posted by The Many Thoughts of a Reader at Wednesday, May 04, 2016 No comments: