What I Read in May

Well, since I last posted, the crazy that is 2020 got even crazier.  I grew up on a lake, as did my husband.  The lakes were connected by a dam.  It's technically a river that was dammed up about 100 years ago.  We got a lot of rain.  One dam broke.  Now there are no lakes, my hometown is destroyed, houses destroyed, property destroyed and this happened to loved ones and strangers in 3 counties.  This is a short simple way of saying, our stressful situation was made more stressful, and my in-laws home is down to the studs.  My husband and his siblings, plus many helpers spent a about 5 days cleaning and demoing out 42 years of living.  Many of my child's school friends had flood damage.  The ball fields I grew up playing on are destroyed.  My favorite breakfast place - destroyed.  Many small businesses - destroyed.

Yeah.  It's been a few weeks.  I actually have not read a book since the day before this happened.  Probably the longest I've ever gone without reading.  I have a book sitting by my chair ready to go for weeks now, but I start the first page and my mind goes.  It's been a time.  It's hard too, because the feelings I have for my hometown are complicated, like most of us probably feel towards our own home towns.  I never felt like I belonged.  I always felt like an outsider and I don't share the same viewpoints as many.  I still feel deeply about its destruction.  I may have made fun of the lake I grew up on, but man did it give me lots of memories. 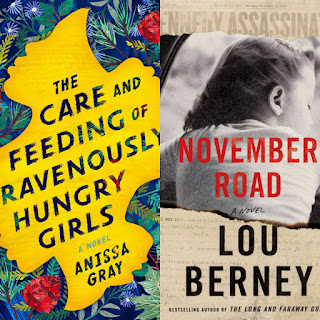 The Care and Feeding of Ravenously Hungry Girls by Anissa Gray was really good! It was a page-turner and set in Michigan! It does do some jumping in time so I feel like if you read it in a couple sittings it's better than walking away.  I devoured it in two days.  It has a lot going on and my only complaint is that the eating disorder part wasn't really elaborated on more towards the end.  I also liked that when it ended, you still had some questions, not so much about the plot, but where the family would go next.

Description: The Mothers meets An American Marriage in this dazzling debut novel about mothers and daughters, identity and family, and how the relationships that sustain you can also be the ones that consume you.
The Butler family has had their share of trials—as sisters Althea, Viola, and Lillian can attest—but nothing prepared them for the literal trial that will upend their lives.Althea, the eldest sister and substitute matriarch, is a force to be reckoned with and her younger sisters have alternately appreciated and chafed at her strong will. They are as stunned as the rest of the small community when she and her husband Proctor are arrested, and in a heartbeat the family goes from one of the most respected in town to utter disgrace. The worst part is, not even her sisters are sure exactly what happened.As Althea awaits her fate, Lillian and Viola must come together in the house they grew up in to care for their sister’s teenage daughters. What unfolds is a stunning portrait of the heart and core of an American family in a story that is as page-turning as it is important.

November Road by Lou Berney is a crime novel that takes a look at the Kennedy assassination.  A what if the New Orleans mob was behind it look.  The main character Frank, realizes that he knows too much and is about to be considered dispensable so he high tails it across America trying to save himself.  On the road he meets a woman and her daughters who are running from her alcoholic husband.  He uses them as cover as they move West to their new starts.  I wasn't as impressed with this one, it's graphic and really I finished it to find out how it ended.  Slightly disappointing, and I like stories about the Kennedy's and the Kennedy assassinations.

What were some highlights of your May reading?
Posted by The Many Thoughts of a Reader at Friday, June 05, 2020 1 comment: