Writing from the Male Perspective..

He hit the ground running.


He ducked inside an open doorway, catching his breath.  He quickly peeked out.  No one.  This wouldn’t last long.  He looked back around the room.  Dark, dusty, cobwebs, an old desk and a window.  Thank god.  He quickly climbed on top of the table and as quietly as he could he opened the dirt covered window.  Thankfully, there wasn’t a screen.  He paused.  Footsteps from the hallway, but no one outside.  He pulled himself up and blinked his eyes as the bright sun glittered above.  He looked around.  He was smack dab in the middle of a bustling street.  People and cars whizzed by.  No time to daydream.  He headed off down the street as quickly as he could without attracting suspicion.


He walked a block down before dipping into a café.  He took a seat against the wall next to the back exit.  He grabbed a coffee from the waitress and waited.  Sure enough, two men in black suits and shades passed the café at a fast clip.  They each had a hand on their belt clip, at the ready.  They glanced in the café but didn’t spot him.  They kept on down the bustling street.


John waited a few more minutes but saw no one else of notice pass the café.  He paid for the coffee and a newspaper and stepped out the door.  He paused as if to check the details of the front page as he quickly scanned the street.  No suits.


He headed to the right at a fast pace.  They had found him.  That meant he couldn’t head back to the apartment.  They’d probably be at his office at the museum.  His brother’s apartment was probably compromised.  However, Sylvie’s should still be safe.  He quickly headed towards the dance studio.

I'm linking up with Write on Edge today, and the prompt was to write in the opposite perspective than you normally write.  I typically always write in the female perspective.  So today, I tried out a male fiction piece. 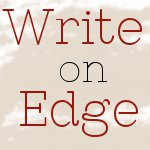