I spent a good portion of yesterday afternoon trying to find something that was easy and matched what I wanted, which was a nice marinated/spicy chicken with pasta and cheese. I kept finding things that either required ingredients I didn't have or things that didn't sound good or right. So, I came up with my own, loosely based on this recipe and the random others I saw and decided to throw ingredients in. We had it for dinner tonight and it was fabulous!
Ingredients
- Box of whole wheat rotini pasta (I used Healthy Harvest and it was delicious)
- 1 tablespoon EVOO
- 2 boneless chicken breasts, cut in small cubes (seasoned with basil, chili powder, garlic powder, onion powder and cracked red pepper)
- 2 tablespoons butter
- 2 cloves garlic, minced
- ½ small onion (I would use more next time)
- 2 tablespoons flour
- 1 cup milk (I used 2 percent)
- 2 cups shredded Monterrey Cheddar Cheese (about.. I measured out 1 cup for the sauce and just spread out a bunch on the top before I put it in the oven)
- ½ cup Mozzarella Cheese
- Parm cheese, salt and pepper to taste/look
- Handful of fresh spinach (I definitely would use more next time.. didn't seem like a lot when it had cooked)
First, I got the pasta cooking via its directions and preheated the oven to 350. I also greased a casserole pan. Then I took the chicken bite size pieces that I had sitting in the seasonings and put it in a pan with EVOO. 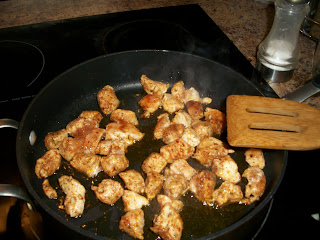 I cooked up the chicken and while it was going I also cut up the onion, garlic and got the spinach ready. 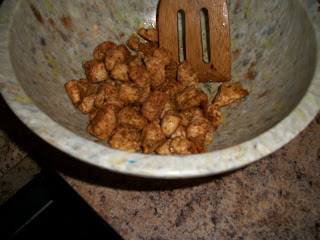 When the chicken was done cooking I dumped it into a bowl to sit. 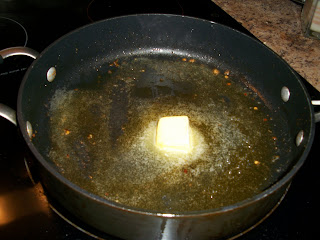 Then in the same pan, I melted 2 tablespoons butter. 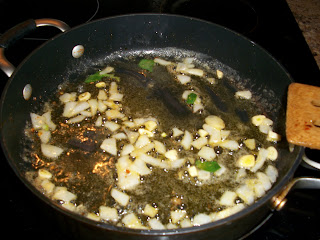 When that melted I cooked the onion and garlic and a few random spinach leaves that fell in, whoops. I let that cook for about a minute. 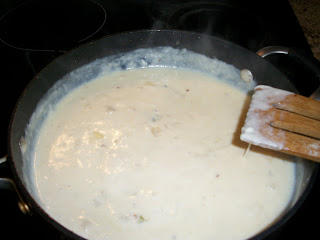 Then I added 2 tablespoons flour. Mixed the flour around and then poured in 1 cup milk. After that was well stirred and warm, I poured in 1/2 cup mozzarella cheese, 1 cup Monterrey cheddar cheese and sprinkled parm cheese on top. Kept it on the burner until it was all melted.
In the mean time, I poured the spinach in with the pasta for the last minute the pasta boiled and then drained it. 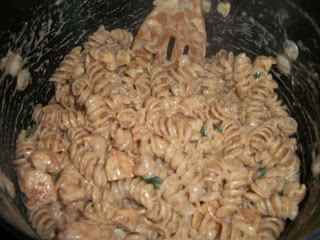 Then I mixed the chicken with the sauce and then the chicken/sauce with the pasta. I added some salt and pepper on top. 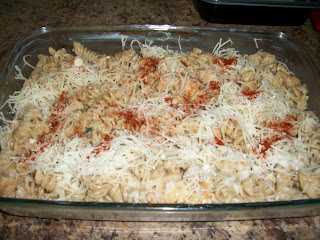 Then I poured it into the casserole pan and topped it with more Monterrey cheddar cheese/parm cheese and some paprika on top. Then put it in the oven for 20 minutes. 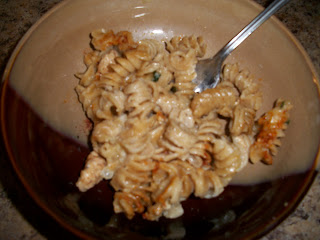 Yum!
Verdict? It was fabulous and I would repeat again. I would probably had a sauce/liquid to the marinade of the chicken next time, and the additions I added with the ingredients, but it tasted great! Would have been awesome with some garlic bread.
Posted by The Many Thoughts of a Reader at Monday, March 07, 2011