I bought egg noodles awhile ago for a disaster of a turkey meatball recipe (gag) and wanted to finish using them up. I also didn't have any meat thawed and needed a dinner recipe that may include some meat, cuz ya know it's not a meal if there isn't any meat. (rolls eyes at hubby) Enter Pizza Casserole.

Ingredients (based off this recipe)
about 16 ounces of egg noodles
pizza sauce (i used about half of an empty jar and half of a full jar so about 1 jar haha)
small onion
chopped pepperoni chopped
4 slices salami chopped
1 Roma tomato chopped
whatever cheese you want to use (i used a mix of Monterrey jack, mild cheddar and cheddar)
oregano
Italian seasoning

First, cook the egg noodles according to the package directions and preheat the oven to 375 degrees. 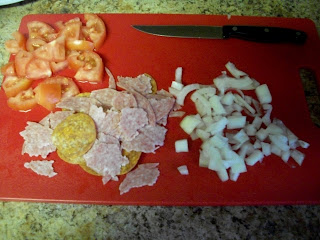 While the noodles were cooking, I chopped up the tomato, pepperoni, salami and onions. 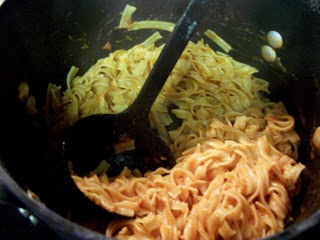 When the noodles were done, I drained them and put them back into the pan and poured about half a jar of pizza sauce in with it and mixed it around. I also added the seasonings at this point. 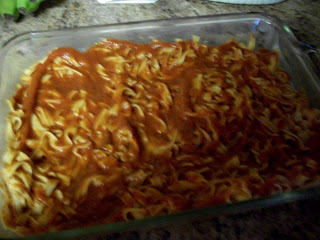 Then in a 13 by 9 greased baking dish I put the noodles down and covered them with more sauce. About another half jar. 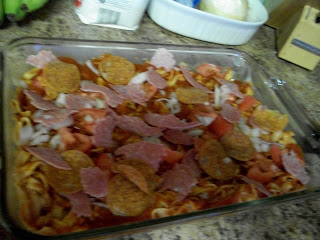 Then I layered down the toppings. I didn't really do this in any particular order just spaced out everything. 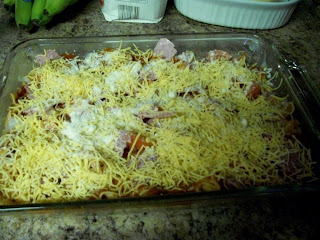 Covered it with cheese and put it in the oven for 18 minutes. 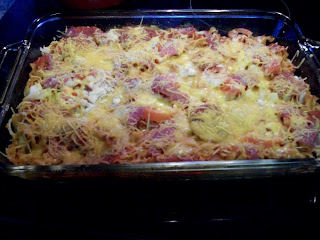 And out it came! Yum!

Verdict? I really liked the salami flavor and the tomatoes! If my hubby liked olives I would have added those and if we would have had some green pepper I would have thrown that in too. Yummy, easy and lots of leftovers!
Posted by The Many Thoughts of a Reader at Monday, March 28, 2011

This sounds really good! I think I'm going to it on my boys. I love to do different things with the ingredients to pizza. I once posted my recipe for a pizza dip - one of my faves. I'll let you know when we try this! ;)