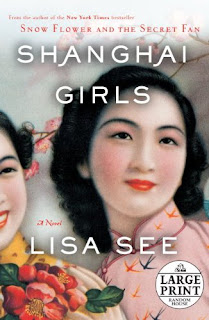 This is the last discussion for our February Group Read, Shanghai Girls. Spoilers are a given. This encompasses the whole book, so if you've read it in the past or have read bits and pieces, jump on in to discuss!

My thoughts
I ended up liking this a lot more than I started to in the beginning. Though, I was irritated at some of the thoughts/ideas of the books but that just makes it a good book, it made me think and feel, right? I really don't even think I had a favorite character. They all let me down at one point. Pearl, because she just wouldn't stand up for herself and just live, May because she was so freaking spoiled and self-absorbed, Sam because he took the easy way out and Joy because she was an idiot. I also wasn't a fan of how it ended.

Questions from BookBrowse
1. Each sister believes that her parents loved the other sister more. Who is right about this? Why?

When they were fighting over this, I felt they both had favorable arguments about why the parents liked the other one better but I think as in many parent/child relationships they liked different parts about each girl the best.

2. Pearl says that parents die, husbands and children can leave, but sisters are for life. Does that end up being true for Pearl? If you have a sister, to what extent does the relationship between Pearl and May speak to your own experience? What's the difference between a relationship that's "just like sisters" and real sisters? Is there anything your sister could do that would cause an irreparable breach?

I can't really fathom this type of relationship that these sisters have. I would have been exasperated and done with May a long time ago.

3. There are times when it seems like outside forces conspire against Pearl—leaving China, working in the restaurant, not looking for a job after the war, and taking care of Vern. How much of what happens to Pearl is a product of her own decisions and choices?

It must be sad to see yourself that way.

5. Near the end of Shanghai Girls, May argues that Pearl and Sam have withdrawn into a world of fear and isolation, not taking advantage of the opportunities open to them. Do you agree with May that much of Pearl's sadness and isolation is self-imposed? Why or why not?

I think it is a mix of some self-imposed and some of the world around her/others. Also, like in any situation people become familiar with what they know/where they are and what not. Change is hard.

Thanks for participating in another group read! I love hearing other people's opinions about books and checking out books I normally wouldn't. Next month's book is In the Woods by Tana French and we will be discussing the first 6 chapters next Friday! If you would like to guest post/compile questions ahead of time send me an email by Thursday and I will include it in Friday's post. Or, if you want to discuss a certain aspect I always have space for guest posts throughout the week! ;) Have a great weekend!
Posted by The Many Thoughts of a Reader at Friday, February 25, 2011