This is a new weekly feature that I am going to host where I give out the gory details about my wedding. Because, it was a huge undertaking and by golly I should get some more mileage out of that very expensive day! I know I have shared some photos before and some I may re-share while I go through and discuss the various parts of one of the most fun days of my life.

So for installment one we have… dun dun dun… THE Engagement..

March 2nd, 2006 I had a snow day from college. It was really snowy and the roads were not good. I had to work until noon and then I had the rest of the day off. I went to Hungry Howie’s and picked up a supreme pizza and stopped by the corner store picked up a 12 pack of Killians. My now husband was busy working because he worked full-time even when we were in school. So I kept emailing/calling telling him about how much fun I was having on my snow day and how he should join me. Well he finally did around mid-afternoon and we were being really being lazy and took a 2 and a half hour nap.. We drank some Killians and had some pizza then we watched part of Never Been Kissed. Do not ask me how I got him to watch that because I have no idea.
However….

At like 7:40 he's like we gotta get ready to go to Applebee’s and turned on music. So I turned off the TV (and he later said if I had not, he wouldn’t have proposed that night) and started getting ready. The song he put on was, "How forever feels" by Kenny Chesney. And I of course was dancing around the room like crazy, being silly, while brushing my teeth and putting on makeup. Of course the whole time during the song thinking, man I want to know how forever feels, ha ha... SO AFTER thee song he comes over to me washing my hands and took my arm and I was like can't I finish washing my hands and he said, "No, I want to know how forever feels." he got down on a knee and said.. "Will you marry me?" and I of course said OH MY GOD.. started crying, hugged him, kissed him, said I love you and then I went after the ring, which was a gorgeous white gold princess cut with 3 stones which was 1 carat. He also was a dear and had it resized before he gave it to me so I could wear it right away! 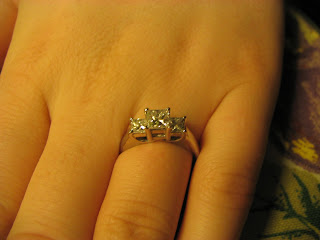 a picture of my ring soon after we were engaged 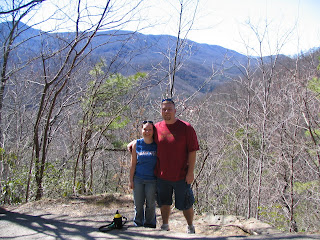 we went on spring break the week after we were engaged, and this photo is from the Smoky Mountains in Tennessee 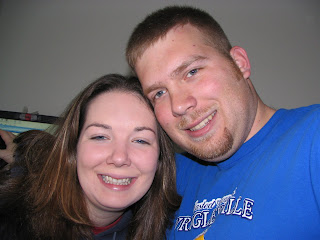 this was also on that spring break trip.. not sure where we are

Posted by The Many Thoughts of a Reader at Wednesday, January 06, 2010

I love that song! What a great engagement story. Your ring is gorgeous!

Great story and I absolutely LOVE your ring! Beautiful.

What a fun feature!!

Amber @ A Little Pink in the Cornfields said...

What a great story! I love stuff like this... I will really look forward to this feature!!! I'm such a mushball like that. ;)

What a great new feature - and your ring is beautiful. Thanks for sharing!

I love hearing engagement and wedding stories! Thanks for sharing. BEautiful ring and a very cute couple :)

Awesome story! This Wedding Wednesday thing is going to be fun!

Awwww!!! I totally had goose bumps reading this!! And what a GREAT song to propose to :D

What a great story! I love hearing stories of how people met/got engaged/etc. :)

Looking forward to reading these installments!