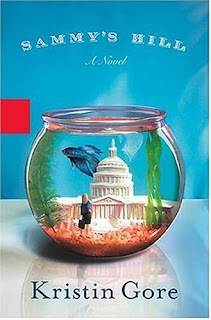 Thanks to Lisa for providing today's discussion for Sammy's Hill! And don't feel bad about it being a doozy, we've all suggested/read some doozies in the past!

First off, for those of you reading this month’s book club selection, I offer up my sincerest apologies for suggesting such a horrendous book! If you want to ban me from suggesting books for the coming months, I completely understand. I feel like I should be punished somehow for selecting this book!

Moving on. It’s been awhile since I finished the book as I finished it on April 1st. And I can’t bear to re-read the section I am responsible for guest posting on, so pardon me for being a bit foggy on the details!

In this section, the wheels totally fall off the relationship between Sammy & Aaron (no surprise there).

Without further ado, here are some questions to ponder:

1. Did you find it odd that Aaron didn’t call Sammy on Thanksgiving? What did you think of his stand-by excuse of forgetting his cell phone charger?
2. Liza calls Sammy out as being obsessed with Aaron and Sammy vehemently denies this and tries to defend their relationship. Have your friends ever disapproved of the person you dated – and told you? Have you ever voiced concerns over a person a friend was/is dating?
3. What did you think of Sammy ability to hack into Aaron’s voice mail? What did you think of the 2-on-1 New Years Eve between Aaron, Darlene, and Sammy?

I have to close by saying that I heard there was a sequel to this book called Sammy’s House. What. The. Eff. How the heck did she get another book published????? \

Don't forget to vote in the poll to pick a read for May! Selection will be announced tomorrow!
Posted by The Many Thoughts of a Reader at Friday, April 22, 2011