In my quest to declutter my house, not to waste groceries and all my list planning came this random recipe for a veggie soup. Pretty much, was trying to empty out some of my cupboard, use up the rest of some veggies and make a hearty soup that would give us some lunch leftovers. Plus, it let me use my crock pot and allowed for my husband and I to eat at what time worked for us since we were both busy that night.
Ingredients
1 small onion
1 can garbanzo beans
½ a green pepper
Jalapenos
2 celery stalks
Left over Spanish rice
Frozen corn
Garlic powder
1 beer (Labatt Blue )
1 can diced tomatoes
1 8 ounce can tomato sauce
¼ cup salsa
¼ cup bloody mary mixer (extra spicy)
1 can kidney beans
Chili powder
Seasoned salt
Oregano
Shredded cheese & Sour Cream for the finished product 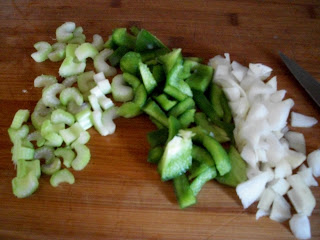 First, I chopped up the celery, green pepper and onion. 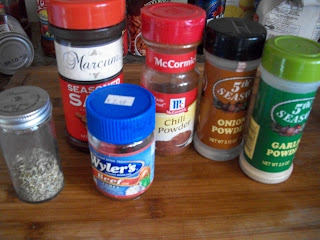 Then I threw in the seasons and 1 beef bouillion cube. 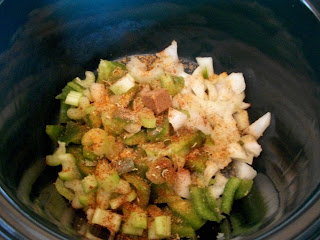 Yum, all of those seasonings. 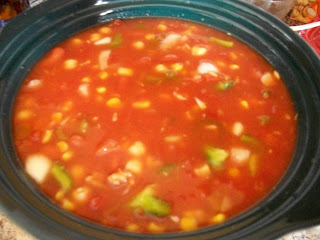 Then I threw in the beer, jalapenos, salsa, diced tomatoes, corn, beans, leftover rice and everything else. It was definitely a lot juicer than I thought it was going to be. I was slightly worried it would be too chunky.

I was looking through my Rachael Ray 30 Minute Meals Cookbook to get some inspirations the other day when I found a yummy cornbreadish recipe that I thought would go great with a chili type of soup. Plus, my husband is a huge fan of cornbread and I am indifferent and we had a box mix taking up space. Enter this recipe. 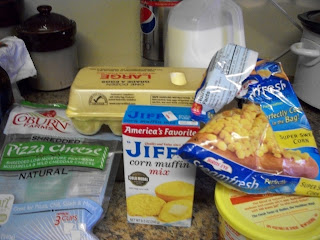 Above is a photo of all the ingredients I used. 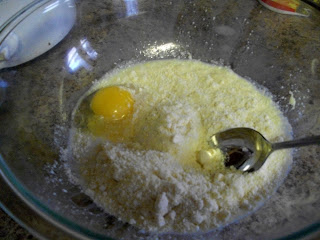 Following directions on the corn muffin box, I dumped the mix and an egg into the bowl. 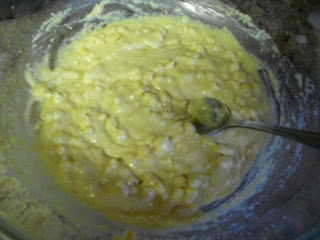 Then I added the milk that the box recipe called for and dumped in the corn. I started off with the recommend amount and then added more cuz I thought it could use some. 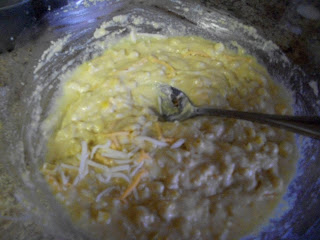 Then I added the cheese. Next time, I would probably add more cheese because I love it so much. But I didn't want to go too overboard and make it weird.
Then, I dumped it into a greased pan and let it bake for about 20 minutes. I followed the heating instructions from the box I used. I checked it at about 15, 18 and 20 minutes and it was golden brown at 20.

Here is a finished product of my bowl of soup, mixed with sour cream and shredded cheese. 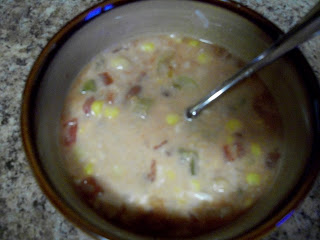 And my husband got into the pan before I could take a photo of the bread! 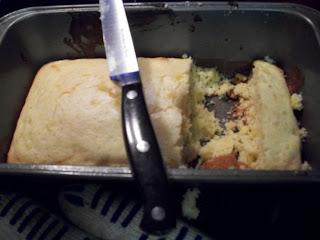 Verdict? I liked the soup but the beer was a little overpowering. It was spicy, filling and yummy. My husband barely ate any, but I blame that on the leftover Spanish Rice I put in the recipe because of him being stubborn about how I make rice. Otherwise, I am sure he would have been fine with the soup. (I hate picky eaters, which he is one!)

The bread was so so to me but then again, I am not a fan of it to begin with. My husband loved it.

What is your favorite empty the cupboard meal?

Posted by The Many Thoughts of a Reader at Monday, January 10, 2011