Potato Soup is one of my most favorite things in the world to eat. I also LOVE my homemade potato soup. It is very time consuming and tedious to cut the potatoes so I don't make it too frequently. I have been wanting some lately and I saw this recipe over at The Brunette Foodie and thought the baked potato part would make it quicker/easier and I was all about trying a somewhat similar recipe to what I make already.

First, I put the potatoes in the microwave (4 minutes one side, 4 minutes other side and they were fabulous) and started melting butter on low over the stove. While that was going on I chopped up the onion, celery and Velveeta. 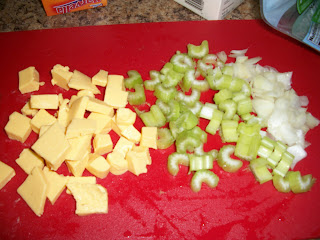 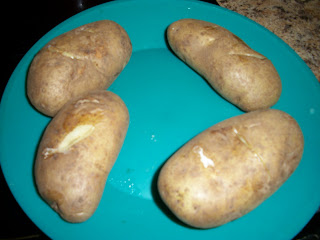 After the butter melted, I added the flour and stirred it in. 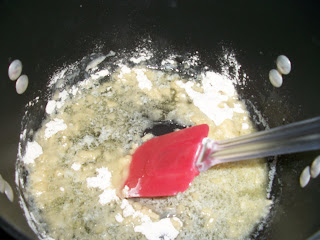 Then I poured in the milk and dumped the celery and onion in the pot. 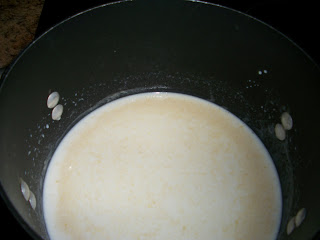 Then I peeled and chunked the potatoes OWWIE they were hot. 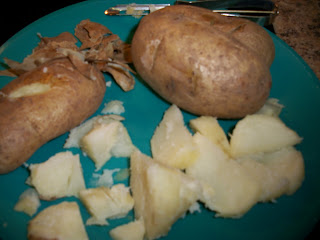 Then I put the potatoes into the pot and turned up the heat and had it boil for a few minutes. I recommend standing by and stirring while it boils cuz in the past I have had milk boiling catastrophes. ;) 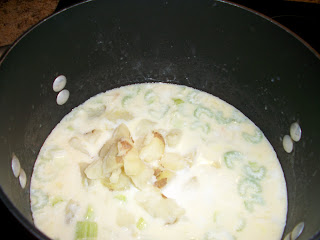 After about 5 minutes of heating up to boil, I let it go around another 5 minutes of just simmering. Then I added in the heavy cream, Velveeta and a generous handful of shredded cheese. (I love cheesy soup!!!) 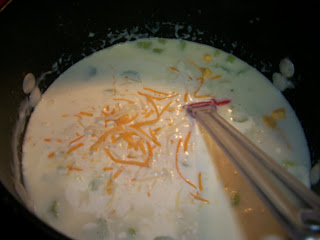 Then I had it sit on the stove top for about 20 minutes on low until we were ready to eat. 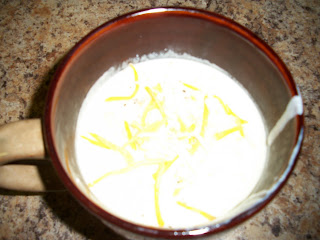 I added more shredded cheese and salt and pepper to my bowl.
Both my husband and I loved it! It was very filling and much quicker than my normal recipe. The only thing I noticed is that the celery was still a little crunchy so maybe next time added it in right as the butter melts? Or longer boiling?
Definitely a repeater!
What is your favorite kind of soup?
Posted by The Many Thoughts of a Reader at Thursday, January 06, 2011