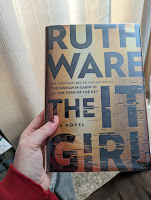 I love a good mystery and Ruth Ware knows how to write them! I could not put down her latest while trying to figure out who did it.

The book flashes from before and after.  The before is before Hannah's best-friend and roommate was killed in their dorm room towards the end of their freshman year at Oxford.  The after is what happened after Hannah reported seeing a creepy porter named John Neville, leaving her staircase shortly before walking up and finding her roommate on the floor.

She had me guessing, I was pretty sure twice but then I was wrong.  She's the queen of dropping the clues so when you are at the end and it's revealed you know exactly what she was telling you at certain points but you did not know what to do with it at the moment! This isn't a slasher, nor is it gory, but I found the delightful England / Scotland setting lovely and the book kept me in my chair for four hours as I flew through!

I am slowly going through her books as I read One by One and immediately was hooked.  This book ranks right up there with that one, I read two others that were just so so, but I feel she is a reliable read when you need a mystery!

What's the last book you flew through?

Posted by The Many Thoughts of a Reader at Monday, November 28, 2022