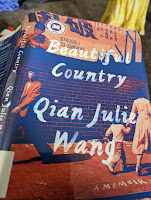 I flew through Qian Julie Wang’s memoir.  She was born in China and then when she was seven she came to America.  She and her parents overstayed the visas they had to enter the country and began a traumatic existence avoiding being caught.

In China, her dad’s family was shamed because his older brother dared speak out about the government.  This brought poverty, shame, and trauma to her dad’s life that he never could escape.  In China, her parents were professors, but in America they were, as a “friend” told Qian no-income.

In New York Qian worked alongside her mom in a sweatshop making pennies for her work and looking forward to the bowl of rice provided during her twelve hour shift!!! In Chinese the word for America, MeI Guo, translates to beautiful country.  It’s very hard and rightfully so, for Qian to find the beauty in the America she lives in.

She was able to attend a public school and had to figure out how to navigate the second grade without speaking the language.  They put her in a special needs classroom where she was largely ignored and taught herself to read in English.

Her story was heartbreaking, vivid, and a story that needs to be read and discussed.

What books on immigration have you read?

Posted by The Many Thoughts of a Reader at Monday, November 14, 2022