What We Read in Preschool [2}

Last week we talked about the letter Nn, learned about Nocturnal animals, explored with noodles, made necklaces and had a ton of fun.  We also read some pretty fun books.

Nocturnal Animals - Was a book I made off of a PowerPoint that I found on the Internet.  It was great and we read it at the beginning of the week and at the end of the week.  It included animals that are nocturnal and some info on them.  The kids liked the real life animals and spent extra time looking at it as it was in our Discovery Area all week. 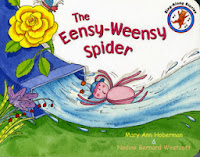 Description: This singsong poem extends Eensy-Weensy's story beyond the drain pipe and through a spring day of adventures.

This is a really cute book that expands on the popular poem.  And of course you have to have an eensy weensy voice. ;)  We also teach them our other version of the poem with our hand movements that are eensy weensy.  We also do a great big spider version and our song person can pick whatever version they want for the day if they want to sing Itsy Bitsy. 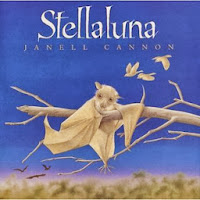 Description: Stellaluna is the tender story of a lost young bat who finally finds her way safely home to her mother and friends. This award-winning book by Janell Cannon has sold over 500,000 copies and was on the bestseller list for more than two years.

This is such a cute story and kinda long but this group loved the tale of Stellaluna and we were even able to talk about differences between birds and bats.

Description: They live in spooky caves, in forests, even in the dark reaches of ordinary attics and bridges. They flock by the hundreds, and they sleep while hanging upside down! In this beautifully photographed Level 2 reader, kids learn about one of the most interesting creatures around—and discover the bat’s unique place in the wild and in the world. The high-interest topic, expertly written text, and bonus learning activity lay the groundwork for a successful and rewarding reading experience

This is also kind of a long book but we just read headings that interested our kids.  They also really liked this book and they learned about differences in bats. 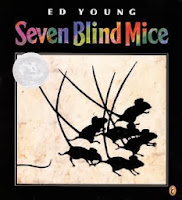 Description: "It's a pillar," says one. "It's a fan," says another. One by one, the seven blind mice investigate the strange Something by the pond. And one by one, they come back with a different theory. It's only when the seventh mouse goes out-and explores the whole Something-that the mice see the whole truth. Based on a classic Indian tale, Ed Young's beautifully rendered version is a treasure to enjoy again and again.

I really liked this one.  It has a lot that you can do with it.  There are colors and it uses first, second, third and so on.  They are also going over an object and each one uses their own descriptive words to describe what they think it is.  I had the kids guess what they thought the object was going to be and their guesses were quite entertaining.  I dismissed the kids in order of the colors in the book, it was interesting to see who remembered the order they appeared in the book.

Description: The 26 characters in this rhythmic, rhyming baby book are a lowercase alphabet with attitude. "A told b, and b told c, 'I'll meet you at the top of the coconut tree'"--which probably seemed like a good idea until the other 23 members of the gang decided to follow suit. Lois Ehlert's chunky block illustrations show the luxuriant green palm standing straight and tall on the first page, but it begins to groan and bend under its alphabetical burden. First the coconuts fall off, then ("Chicka chicka... BOOM! BOOM!") all the letters also end up in a big heap underneath. A very simple board-book version stops there, but this original text goes on to introduce the helping hands of the 26 uppercase "mamas and papas and uncles and aunts."

Classic favorite.  Love that so many of them already knew it and even those who didn't could read along with me towards the end.  Then we used a chicka chicka boom boom rhythm to transition into large group time later in the day.  We always have this book in our library along with a felt book and the kids have been 'reading' it ever since.


What children's books have you recently read? Any favorites about animals that you can recall from your childhood?
Posted by The Many Thoughts of a Reader at Monday, September 30, 2013