I've teamed up with Partners In Crime Tours again and received Section 132 by Helga Zeiner to review.

SYNOPSIS:
Lillian is only 13 when her parents marry her to a middle-aged Bishop of a fundamentalist sect who practices polygamy. She is forced to live with her new husband’s many wives and children on his compound tucked away in the Canadian wilderness.
The hardships of poverty and isolation have crushed the will of just about everybody in his flock. They suffer in silent submissiveness, trying to please their despotic leader. He justifies the humiliating treatment of his dependents by citing ‘Section 132 of the Doctrine & Covenants’ of his fundamentalist religion.
Until, one day, Lillian had enough. But it is dangerous to try and escape the Bishop’s iron rule. He practices blood-atonement, which is quietly sanctioned by the ‘Gatekeepers’, an American secret society within the Fundamentalist Mormon Church.
Lillian must find out-side help if she ever wants to leave the Bishop’s compound – but how can she do this if she is locked up without any means of communication?
Lillian doesn’t know how life outside a compound functions. She only knows that she can not live like this much longer. Many questions plaque her troubled mind.
Why do her sister-wives put up with this hardship, knowing only a bleak future lies ahead of them? Where do the child-brides come from, the Bishop keeps adding to his family? Where do some of his daughters disappear to, once they come of age? Lillian’s defiance grows with every injustice she witnesses – until she can’t hide her rebellion any longer.
Her desperate struggle to escape draws the reader into a very dark, very dangerous place. But not all is hopeless. When land developer Richard Bergman buys the neighboring property, Lillian’s luck seems to be changing …

My thoughts:
I think this is the third book I've read about polygamous sects because I find them so fascinating.  I like reading about things that are different from what I know.  This book was horrifying, interesting and kept me engaged.  It was slow getting in to it, but around Chapter 44? I think it really picked up and I was really interested for a few chapters and then it kind of went blah again.  It swapped perspectives from Lillian/Martha (young girl forced into polygamous marriage) and Richard Bergman the developer.  I much preferred reading the sections in Martha's viewpoint.

Richard's character was just ehh.  It was hard to like him, hard to read his parts and I did a lot of skipping through.  Martha's chapters were far more interesting but I found myself skipping over stuff there too.  I think it was because I felt there were parts that got a little wordy.  When action was happening it was great, though some of the conversations between Daisy (Richard's assistant) and Richard were like riiiight, people don't talk like this.

I really enjoyed the story.  I liked that it focused on a young girl forced into the marriage (I don't like that she was forced into marriage but I appreciated the viewpoint and story) and told her evolving views.  I also like that it showed how hard it is to get away from that lifestyle especially when it is all you know.  Based on my other reads about polygamous marriage, it seemed accurate and equally as horrifying to me.  I also liked how the author had Richard feel like it was no big deal and that the women OBVIOUSLY chose to do it , so it can't be all that bad.  Um, right..

Overall, it was eh.  Good storyline, but the writing was not my fave.

I do have a one e-book copy to giveaway.  If you would like the chance to win, just leave a comment and a way for me to contact you.  Giveaway is open through, Friday, July 13th. 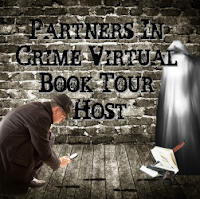 Have you read any books about polygamous sects? Do you think people should just leave them alone or should they try to give them information on leaving?

I received this book from Partners In Crime Tours but all opinions are my own.
Posted by The Many Thoughts of a Reader at Monday, July 09, 2012