We hadn't intended to go to Castle Park, we were actually looking for another on the spur of the moment, lets go to the park trip, but since we stumbled upon it, we made it work.

Our local town has a guide to the 100s (YES 100s) of city parks and gives a bit description about them and the crossroads to use to get them.  The small problem with having SO many parks, is that some of them are basically just a big backyard.  Some are so old that there isn't much left to play with or what is there is SUPER old.  Also, our town is apparently not replacing stuff at smaller parks anymore, so that kinda stinks when you have a small child that gets trampled at the bigger well loved parks!

Anyhow, we were cruising a neighborhood in search of a park, and found the sidewalk wedged between two houses that had a city park sign, so we pulled in and walked down the path into a very large open area.  According to the website, it is only a 0.3 acre park, but it seemed rather large to me.  Maybe, because it was soooo wide open and maybe cuz part of it was actual backyards, but it seemed rather large. 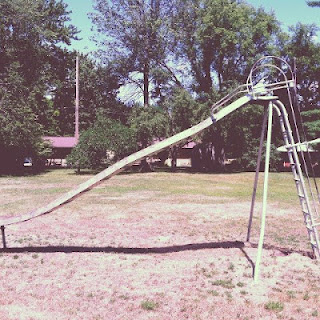 Yeah, my friend may have down some editing to make it more creepy, but seriously!!! It was creepy! Isla enjoyed the swings while we used her trusty iPhone (gotta love technology) to try to locate the park we had been in search of.  Which, ironically, is named after a street (that we had been on searching for it!) but is not located on that street.  Nor, right next to it.  That just doesn't seem right ha.  More on that, park at a later date!

Overall, this would be a nice park to have in your own backyard, but not worthy of a repeat visit for us!

Have you ever visited a park and had immediate visions of a creepy 70s horror film?
Posted by The Many Thoughts of a Reader at Thursday, July 12, 2012