I have been doing a lot of read togethers with the 7 year old of middle grade novels and I'm loving it.  I've sorta struggled with adult books lately, so it's nice to be finishing something and having the kiddo be so into reading and writing stories! It's like myself 27 years ago! 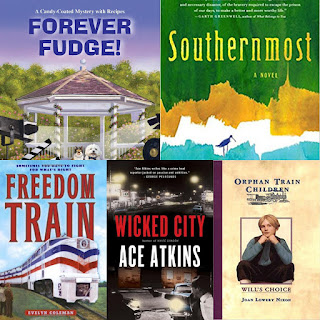 I slowed down a bit in October and 'only' finished five books.  I loved Forever Fudge and Freedom Train.  Freedom Train is a middle grade novel about a young boy whose brother is a solider who guards the Freedom Train.  The train is traveling to all 48 states and will stop in Atlanta.  When it does, Clyde (main character) is expected to deliver a speech and he stutters when nervous and talking in front of large crowds.  He gets bullied a lot and a young black boy sticks up for him.  When Clyde's dads boss tries to get his new friend kicked out of his house due to his race, Clyde has some big choices to make.

Will's Choice was a middle grade novel that I read together with the kiddo.  It is the second book in the Orphan Train series.  For any adult who liked the book Orphan Train, this series for kids is a good one.  It follows different orphans that were on the trains.  We also finished Aggie's Home, which is the 4th book in the series.  It was probably my favorite so far because it includes feminist characters and about women's right to vote.

Southernmost was a novel about an evangelical preacher from the south who realizes that all the judgment that his church and parishioners are doling out towards gay people is wrong, and when he tries to be more publicly accepting it turns his whole life upside down.  He gets a divorce and his wife gets a southern judge to award her majority custody because there is something clearly wrong with the preacher.  He makes a few questionable choices and the book follows how he changes his viewpoints and how it changes his life.

Wicked City was not anything I'd recommend.


In 1955, Look magazine called Phenix City, Alabama, "The Wickedest City in America," but even that may have been an understatement. It was a stew of organized crime and corruption, run by a machine that dealt with complaints forcefully and with dispatch. No one dared cross them-no one even tried. And then the machine killed the wrong man. When crime-fighting attorney Albert Patterson is gunned down in a Phenix City alley in the spring of 1954, the entire town seems to pause just for a moment- and when it starts up again, there is something different about it. A small group of men meet and decide that they have had enough, but what that means and where it will take them is something they could not have foreseen. Over the course of the next several months, lives will change, people will die, and unexpected heroes will emerge-like "a Randolph Scott western," one of them remarks, "played out not with horses and Winchesters but with Chevys and .38s and switchblades.

Our October book club pick was The Heretic's Daughter by Kathleen Kent.  It is based upon the author's families real life history with the Salem Witch Trials.  A lot is fictionalized but some of what is included is from family lore and the actual documents that surived.  The main character is Sarah Carrier, who was arrested along with most of her siblings and her mother.  The book covers right before the witch trials and a little after.  It was really good!

What have you recently read and loved? What are you currently recommending?
Posted by The Many Thoughts of a Reader at Monday, November 05, 2018