I love quotes.  When I was younger I would write quotes in notebooks all over.  Then I would copy and paste them into a massive Word Document and print them out and hang them everywhere.  As an adult I buy sayings and hang them on my wall.  Set them on my mantle. But them on my bookshelves.  And now I've come full circle and started writing them in my notebook I carry around with me.  This time I'm just focusing on book quotes.  Sometimes to remind myself I want to include it in a review, or share it with a friend, or just because I feel so much YES YES YES about a statement.  I've filled up a page in my notebook, since I started copying them down and decided I would share them here since I've done nothing with them. :)

"A trigger - happy government.  Suspicious of everyone, regardless of citizenship.  No, not citizenship, she corrects herself, race. " Flight of Dreams by Ariel Lawhon

This quote is in regards to the German government at the onset of WWII.  I loved this fictionalized tale on the way the Hindenburg may have met its fate.

"But Clara had her own little secret.  She didn't really let go of everything.  Most things, yes.  But some she secretly held and hugged and would visit in moments when she needed to be comforted by the unkindness of others." Still Life by Louise Penny

This quote is just dark enough to be so so true about moments of self-doubt and loathing.  It's from the first book in the Armand Gamache series by Louise Penny.  Highly recommend!

Feminist Romance novels for the win!

Description: Lonesome Lily Turned Scandalous Siren
Miss Lillian Hargrove has lived much of her life alone in a gilded cage, longing for love and companionship. When an artist offers her pretty promises and begs her to pose for a scandalous portrait, Lily doesn't hesitate...until the lying libertine leaves her in disgrace. With the painting now public, Lily has no choice but to turn to the one man who might save her from ruin.Highland Devil turned Halfhearted DukeThe Duke of Warnick loathes all things English, none more so than the aristocracy. It does not matter that the imposing Scotsman has inherited one of the most venerable dukedoms in Britain—he wants nothing to do with it, especially when he discovers that the unwanted title comes with a troublesome ward, one who is far too old and far too beautiful to be his problem.Tartan Comes to TownWarnick arrives in London with a single goal: get the chit married and see her become someone else's problem, then return to a normal, quiet life in Scotland. It's the perfect plan, until Lily declares she'll only marry for love...and the Scot finds that there is one thing in England he likes far too much..
"Most Americans understand that being born in the United States, with all opportunities that entails, is a matter of sheer serendipity.  Enrique's Journey by Sonia Nazario 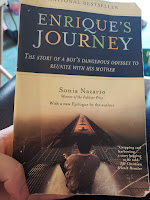 So much yes.  If you haven't read Enrique's Journey which details a VERY young child sneaking into the United States to join his mother in America.

Do you collect quotes? What are some of your favorite bookish quotes?
Posted by The Many Thoughts of a Reader at Tuesday, November 13, 2018