I am a nerd. I like watching old movies and I grew up watching TCM (Turner Classic Movie channel) with my grandpa late at night. I was browsing through their selection for the next week or so to see what was coming up and next Sunday, August 15th they are doing a special on Margaret O' Brien who played the role of Mary Lennox (among other popular roles), the orphan in The Secret Garden. The Secret Garden was our July Group Read for our blogger book club and for those of you who enjoy old movies or watching the movies to the books you have read or for those of you who like to watch the movie but not read the book :::glares at my hubby:: then you may want to turn in to TCM next Sunday at 8:00 p.m. to watch The Secret Garden. 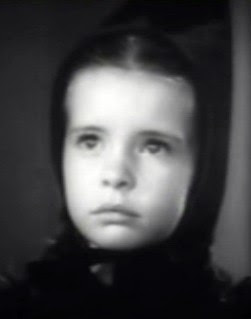 this is from the trailer from Journey for Margaret
From gathering information from TCM's website, it appears this is the only version of The Secret Garden that stars a major child star in the role of Mary Lennox. Margaret O'Brien shot to fame in movie Journey for Margaret in 1942 at the age of 5!!!! She also played Beth in the 1949 adaptation to Little Women, my FAVORITE book ever. Which will be also airing next Sunday at 5:45 for those Little Women fans out there! (I may have to have my hubby record these for me, since we are having family over. Because I want to see Little Women, I don't think I have seen that version, but I may be wrong. I will also give The Secret Garden a shot, but I don't know if it will hold my attention. Maybe it will surprise me!)

Also, the movie is filmed in black and white EXCEPT for the parts where they are in the garden. Those are in color. I really would be interested in seeing how they can transform the description of the gardens into reality in the film.

Do you enjoy watching old movies?

I really, really like old movies. I like how they didn't have all of the special effects back then...