The day of the ceremony I woke up and it was 39 degrees outside. It was August 18th. WTF? But do not be alarmed by 4pm when I waltzed down the aisle it was a sweaty late afternoon with a hint of rain in the future. My wedding day was beautiful.

I woke up on the couch of my best-friends house early and the hair work began immediately. She did my hair, my moms and some other girls and another friend came and did a few other girls hair. The only people not with us were my future sis-in-laws. It was a great morning of laughs, food, drink and girlie time.
Wedding Day regret number 1 began with having someone else do my makeup and hating the way it looked later in photos.
Oh and did I mention I swell BADLY in summer? Yeah, I was an effing whale bride. Yay me. I gained a CRAP ton of weight the summer of my wedding.. Hello stress eating. Why can't I be of the not eating because of stress variety? 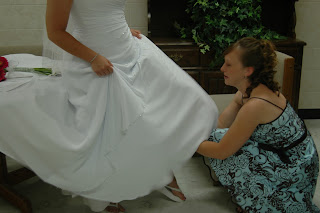 Anyway.... we arrived at the wedding/reception site LATE of course.. Whoops.. After telling the boys an hour earlier time that they all showed up on time for .. whoops.. We got ready in a hurry and that just meant the boys were done early and had more time to sit around and drink.. ha. 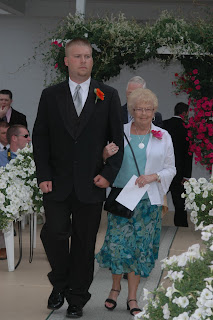 Our wedding started promptly at 4 and I walked down to my uncle singing "She" by Elvis Costello. It was beautiful. The ceremony was what I wanted. Full of laughs, friends and love. Short and sweet. (Did I mention the outrageous comment my uncle made out exotic shaving during our ceremony? Yeah.. that may be why my family was mortified I was having him marry us.. ohh the drama) It was made longer only by my attempts to fit people into it that meant a lot to me/us. My uncle sang a 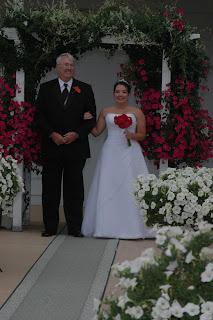 song that he had performed at my parents wedding and my friend sang a song cuz she is AMAZING. All too quickly the ceremony was over and it was off to picture time.. blech 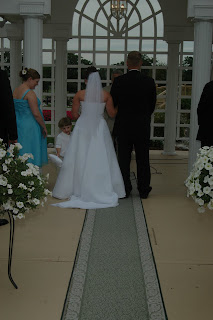 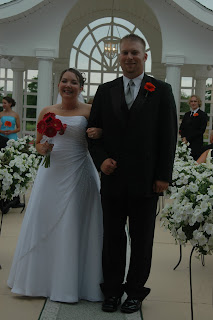 We did not have any bible readings at our ceremony mainly because we have seen Wedding Crashers one too many times and laugh out loud at weddings when we can guess the readings they will have. What is ONE thing you always roll your eyes about at wedding ceremonies?
Posted by The Many Thoughts of a Reader at Wednesday, March 17, 2010

Amber from Girl with the Red Hair said...

Well I for one think you looked ABSOLUTELY STUNNING!

I don't really like corny "I love you sooo much and can't live without you" vows. They make me giggle.

You do NOT look like a whale of a bride! You looked gorgeous!!!

Yeah, the Corinthians reading makes me crazy because it's so overused. And I agree with Amber - when people say "I can't live without you," I scoff, and not because I don't believe in romance, I do. I heard a line once (I'm sure from a movie), where the girl was telling the guy "I'm not saying I can't live without you. I can. I'm just saying I really don't want to." It's a choice, ya know?

Anyway, you looked gorgeous! I love these Wedding Wednesdays - maybe I'll do something similar on my blog - it's fun to remember!

I roll my eyes at weddings when the soloist sucks, when a bridesmaid almost passes out, and when the flowers an/ or decorations are tacky.

Your pictures are amazing and you looked beautiful.

I think you look GORGEOUS TOO!
I had the hardest time writing our wedding ceremony because all the readings and vows were SO corny. I'm still not 100 percent satisfied with the readings, but I guess I have to settle for a bit of cornyness.

Everyone keeps telling me I will lose weight before my wedding because I will get nervous...who LOSES weight when they get nervous?! Not me!

You look gorgeous! YOu were such a beautiful bride!!

It doesn't exactly annoy me, but ever since having watched Wedding Crashers and how there's always someone quoting the Corinthians, I can't help but notice it!