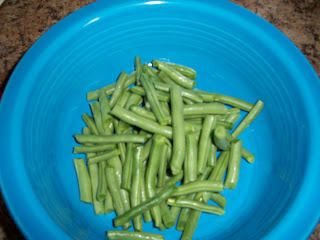 First, I snapped the green beans and put them in my bowl. I didn't have a ton of green beans obviously, it was like a 1 1/2 cups total. Obviously, using more would have been better but I was using what I have. 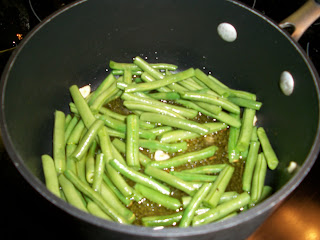 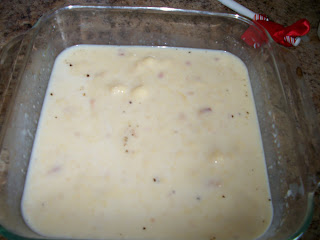 Meanwhile, in a small pan, since I wasn't using a lot of green beans, I poured in 1 can of cream of chicken (wanted to use cream of mushroom but I didn't have any), 1/3 cup of milk, and some pepper. I mixed it all up. 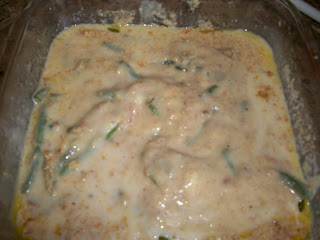 Then I dumped in the green beans and here comes the sad part, I didn't have any French fried onions (GASP) so I used bread crumbs. Obviously, not as tasty, but they worked in a pinch. I poured in around 1/3 cup with the mixture and then put it in the oven for 25 minutes.
After 25 minutes, I took it out and poured some more bread crumbs on top and decided to throw some mozz cheese on top. 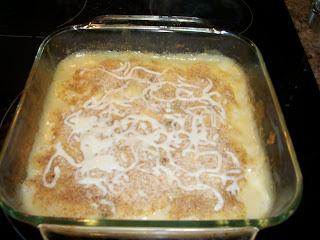 Five minutes later, I pulled it out and here it is. My husband devoured it, but I determined that the french fried onions make he green bean casserole for me.

I have actually never made green bean casserole *gasp*. But that looks like a recipe I HAVE TO try!! I bet Eric would eat that, too!

Bet it was better with fresh beans!

Oh my gosh, I LOVE green bean casserole. Unfortunately, the cream of mushroom and cream of chicken soups have gluten in them, so I can't have them anymore. Makes me so sad... I did get ot have it last T-giving since my aunt made a GF version, but I wont' be going there for T-giving this year so I am going to have to go without. *le sigh*

I love green beans but I never really eat casserole cuz of the cream, it looks really good though!

I have to agree, I love the crunchy fries onion bits.

This is way I cook -- I want to make X but I don't have all the ingredients, so I start substituting. Those crunchy onions are delicious, but this sounds like you made a winner.