So I am really not a fan of pork. Like at all. Our relatives are pig farmers and I can barely eat any of their meat, which I have been assured by MANY others, is fabulous; I just cannot do it. I do LIKE pulled BBQ pork, just not from any animals I may have ever smiled at/looked at. Wierd, I know, but I am seriously like 4 steps away from being a vegetarian if it were not for cheeseburgers and chicken tacos. So, last night I tried once again to make a pork recipe that was not bbq pork. I had made this recipe before on the stove top, but the pork was still what I considered too tough. So I was reading some people's adjustments and thought, "Ah, the slow cooker. I love when the meat falls apart in the slow cooker, I'll try that!" And that was the best decision EVER. What ended up coming out was like the insides of a Qdoba burrito. And I LOVE QDOBA. So that was excellent. (I say, so, way too much.) The hub loved it, I loved it = success. We ate it on top of brown rice, but decided next time we would mix it with the brown rice and put it on a burrito. We used a few tortilla chips to scoop stuff out, but for the most part we just ate it on top of the rice with a dap of sour cream. And sorry, but I did not take any photos of this endeavor.

Here is the Black Bean and Pork Chop recipe that I pulled from and here is what I did..
Inside of my small (I have two) crockpot I put..
-half a medium onion on the bottom
- 3 thinly sliced pork chops sprinkled with cilantro and chilli powder
- 1 cup of hot salsa
- 1 can (15 ounces) black beans
- sprinkling of black pepper
-sprinkling of more chilli powder and cilantro on top
-sprinkling of cracked red pepper
Put on the low setting for about 6-7 hours cuz that's when we ate. Made brown rice how the box said.
It was fabulous. Next time I will probably make it hotter and probably make it into a burrito.
And because I feel like sharing a photo.. look at this scrumptious meal the hubby made a few weeks ago on the grill with mostly veggies from our garden... 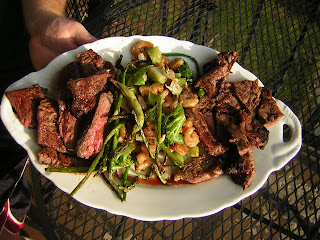 Posted by The Many Thoughts of a Reader at Wednesday, August 26, 2009

That sounds so good! I love crockpot dinners. I tend to use my crockpot more in the fall/winter, so I will flag this recipe & try it then. It would probably go well w/ the quinoa salad I posted today on my blog!! :)

Crockpot or not - I cannot stand ' the other white meat' as it's marketed up here. Except for bacon....I am addicted to BLT's now that my tomatoes have ripened.

This looks easy and delicious! I'm digging all the crock pot love :) Keep on crocking!