First, I must state that I cannot believe that it is already June.  May flew by! I am 23 plus weeks pregnant! Holy cow.  Summer vacation begins at 3:55 this Friday.  I am so excited for 3 months with my girl.  I kind of feel bad because we are only going on 2 camping trips this summer, but I am unsure how I will do camping.  We add in some more trips after I see how I feel, but I am gearing up for a fun summer doing activities we enjoy in our community. 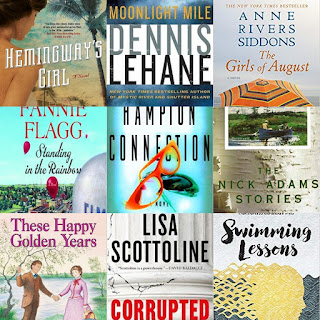 I read 9 books, and like April, I was clearing off my bookshelves.  Swimming Lessons was a 'newish' read because I got it for Christmas because it was a book club pick.

My favorites were The Nick Adam Stories by Ernest Hemingway, Hemingway's Girl by Erika Robuck, and Swimming Lessons by Claire Fuller.

Hemingway's Girl is set in Key West and is about a Cuban/American young woman who goes to work for the Hemingway family and follows along with her job, Hemingway's temperament and womanizing ways, and finding a love of her own.  It was a good story!

Moonlight Mile by Dennis Lehane was part of a series, that I hadn't read any of the others (whoops) but was fine as a standalone.  There was enough back story given that it wasn't hard.  I will actually probably go back and read others eventually but I would give it more time since some of the back story was given in that book.  It was about a husband/wife team that are private investigators.  They have  a case which takes them back a decade or so and finding a lost young woman whom they searched for when she went missing at age 4.

The Girls of August by Anne Siddons is about a group of women in their 40s/50s that are wives of doctors that became friends when their husbands were in school/doing residencies.  They start on yearly trips but have taken some time off when one of the wives died.  They start back up with a 20 something new wife of one of the docs, and it's interesting to see how they include her and antagonize her.

Standing in the Rainbow by Fannie Flagg is about the residents in a small Missouri town spanning the time from the 1940s until I think it was the 1990s.  It's a long time.  It's a great character book when you like to learn about different people and follow their lives.  Some from childhood through adulthood.

The Hampton Connection by Vincent Lardo is about an amateur detective who is also a famous person in Hollywood and the mysterious death of a young woman found in a locked cabin that was rented by some theater actor friends.

The Nick Adam's Stories by Ernest Hemingway was awesome! I have never read anything by him, only about him and have been scared off by other people.  I LOVED this.  It is a collection of short stories of a character he invented who is Nick Adams.   Nick Adams sounds a LOT like Hemingway and a lot of the short stories are set in Northern Michigan where he spent lots of time growing up.

These Happy Golden Years by Laura Ingalls Wilder was the most recent book we read aloud as a family.  We've really enjoyed this series and we don't know what we will start reading aloud next.  We may do Charlotte's Webb because apparently my husband has also never read that book.

Corrupted by Lisa Scottoline is about a lawyer who gets a call from a former client and feels like she owes him from what happened in the past.  The book goes back to that case and to the present and brings up good conversation about how the juvenile justice system is run.  It's based on a real problem in the Pennsylvania Juvenile system.  This is also in the middle of a series, but I didn't have a problem reading it.

Swimming Lessons by Claire Fuller is about a missing/dead mom and the messed up family life caused by the egotistical father.  I wrote more on my review last week, but I'd sum it up as a good book club pick!

Currently I am reading The Winner Maker by Jeff Bond.  It's about an older teacher who picks a special group of students each year called the Winners.  He goes missing and some of his former Winners get together to find him.  It's interesting!

So with 5 months gone in the year I have completed 33/52 books of my goal.  I believe at this point last year I was at 26 books and finished at 81.  So I appear to still be in good shape. I am continuing to clear off some bookshelves but have ventured back to the library (The Winner Maker) and will probably get more books this summer from the library.


The kiddo has been loving the series Lola Levine.  She is already on book 5.  She also is on book 9 of the Sophie Mouse series.  She tried Zita the Spacegirl and wants to read more in that series as well.  She is currently reading Piper Green and the Fairy Tree, which is surprise, another series!  I can't wait for our library trips together this summer.

this was a picture from a library trip earlier this month

What are you reading? What should we read aloud together next?
Posted by The Many Thoughts of a Reader at Tuesday, June 04, 2019