This is a game I have grown up ITCHING to attend. I've begged, pleaded, offered anything for my mom to let me use her ticket to attend THE GAME. The biggest rivalry in college football. 2006, I would have given ANYTHING to be in that stadium #1 vs. #2 with sooo many implications and PERFECT weather. Alas, I spent it outside the Holiday Inn watching it at Hineygate with a few hundred of my fellow Buckeye fans. While, that was a fun environment, I am sooo jealous of everyone who made it into that stadium that day.

Enter this year. Out of the blue, my mom called up and asked if I would want to go to the Michigan game with my dad. UM HECK YES!!!!!!!!!!!!!! Basically, she swears she was going to let my brother and I take a turn at least once to go and decided since I was pregnant she would let me decide if I wanted to go now or wait until later so I could drink hahaha. I chose now because really, will she hold up this promise in the future? Will the Buckeyes continue their 7 year domination? (I hope so.) But I took the sure thing and this past weekend I headed down to Columbus with my dad to watch our Buckeyes BEAT THE FREAKING WOLVERWEENIES!!!!!! 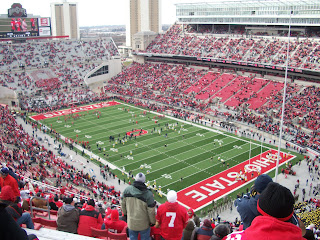 pre-game teams are on the field warming up 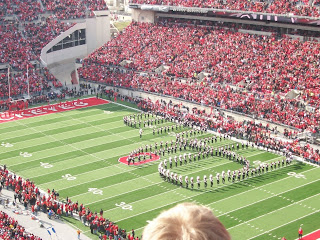 The Best Damn Band in the Land performing Script Ohio

It was soooooo cold. And probably at the end of winter I won't feel that way but it had not been cold at all and then BAM. No time for the body to adjust, so the weather is the reason I blame my lack of photos that I would have probably taken if I had wanted to risk taking my gloves off anymore!!! My dad took some too, but I haven't gotten his yet. I also am a bit mad, because I couldn't really see through my camera when I was taking video/photos and so when I was recording Script Ohio I cut it off right before the dotting of the I!! But I did get some photos.

So, did this epic battle live up to my childhood dreams? Yes, and no. Going in, I knew Ohio State was going to win, I could only pray that it would be an absolute stomping to make it super enjoyable. Heck, if OSU would have lost I probably would have had a heart attack, Michigan sucks that bad right now. But, U of M lived up to my expectations. Denard Robinson did not play the entire game, their defense was horrid and Michigan still sucks. Oh and my favorite part? Getting to hear around 100,000 people join in and sing "I Don't Give a Damn For The Whole State of Michigan." LOVED. Wish I would have recorded it. It could have been warmer and it could have been more competitive. 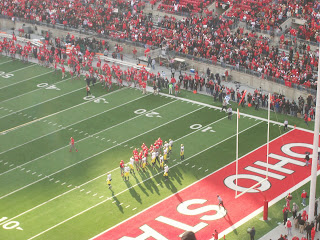 the last few seconds winding down 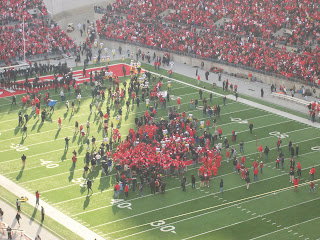 the team celebrating on the field
In the end, I am THRILLED that my Buckeyes have won 6 straight Big Ten Championships and have beaten Michigan a record 7 TIMES IN A ROW!!!!! Now, if only I could convince my mom to use her ticket every year... 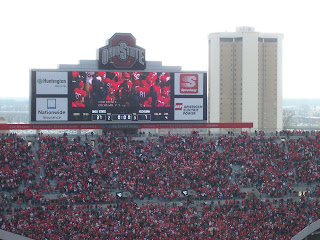 Oh fun! Looks like it was an awesome game. I have never been to a game in a huge stadium like that. I have watched them on tv and thought it must be pretty darn amazing to be there in person! So glad you had such a great time!!!

Good choice doing it now... once you have the baby you have to deal with the babysitter aspect for the whole game haha.

Glad you guys one and you had fun :)

PS. I just wanted to let you know after reading American Wife last year I had to read Laura Bush's book- got it out of the library and am totally skimming through it just to find out what parts of American Wife were true to her life. Very interesting haha. Plus I do actually relate to her in some ways and its interesting to hear about things I actually remember happening from a different perspective.

Amber @ A Little Pink in the Cornfields said...

Looks like fun! I love big games like these! I'm glad you got to go. I actually own a Buckeye's shirt... A few years ago I was in the Columbus airport for a long layover and was freezing (I think it was Fall?) and I didn't have a jacket. I was so cold the man next to me offered me his jacket (nice, but no thanks!) so I found the closest gift shop and bought a long sleeved Buckeye shirt. I still wear it all the time bc it's so comfy and get teased by every guy I date. I don't think guys around here like your team.... ;) Anyway, just had to share!