The weekend started out with a surprise snow day for the 10 year old! I had known that it was supposed to snow maybe 3 inches over night but it hadn't even started by the time I went to bed so I was like ahh they lied.  Yeah... no.  I woke up around 6:30 and checked my phone and surprise, snow day!
We started Friday off lazy with taking turns picking shows, then I warmed up the requested canned chicken noodle soup while the 10 year old shoveled a path from our door to the driveway.  After lunch, we went outside and I finished the shoveling around the garage and sidewalks and the girls played outside for awhile because for once when it snowed, the sun was shining and it was near 20 so it wasn't horrid.
The two year old took a ridiculously short nap and the oldest watched a disney plus movie while I didn't accomplish much! Lucky for us my husband surprised us and came home early.  We ended up having a couple errands to run so we hopped in the car and dropped off our winter taxes, dropped off his employees paychecks, got a car wash and picked up milkshakes as a pre-dinner appetizer.  When we got home we made brisket nachos for dinner and had a lazy evening.
Saturday I took the 10 year old to the library and we picked up our holds and browsed for awhile.  Our library still hasn't fully reopened since the flood in May 2020.  Hopefully it will be finally finished and ready the first week of April.  During nap time I read and the 10 year old and my husband started playing Ms. Monopoly, but it was another SUPER short nap so they had to hide the game away until later.  We took a walk in our woods and hung up a new camera so we can see animals in our backyard.
My husband spent all day Saturday making homemade beef broth and beef stew for dinner. It was delicious!  Saturday night I drank wine and read and the 10 year old and her dad played over 2 hours of Ms. Monopoly! Sunday we went to to the local nature center and the kids played at the nature playground and then we did the short trail loop in hopes of tiring out the 2 year old to take a better nap, because we were allllllll needing her to do that.  Or to poop, since I'm sure that would have helped the other issue.  That took up just over an hour and then we stopped and got a drink and fries for a pre-lunch car snack. 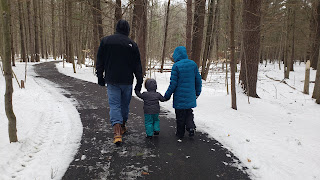 The rest of the day was spent watching basketball, playing with the nerf gun, and then we had another delicious dinner of steaks, asparagus, baked potatoes and rolls.  yumm.  The two year old finally pooped and we ended our weekend watching Dr. Pol. Just started this late Sunday night!
Hopefully this was our last 'winter' weekend.  I would really like to be able to venture out some more without having to worry about all the winter gear.
This week we have the last battle of the books virtual written battle, second swim lesson for the 10 year old and the weekend includes a 71st bday dinner for my dad.  Slightly less busy than last week but we are slowly adding things back in to our schedule.
How was your weekend?
I
Posted by The Many Thoughts of a Reader at Monday, February 28, 2022