March started off super quick and then as soon as we started staying home, my focus went out the window as did my book count! 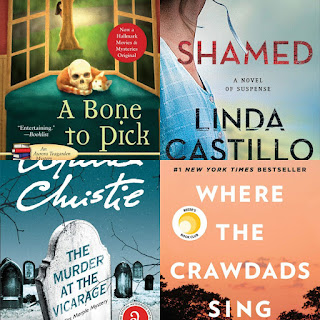 A Bone to Pick by Charlaine Harris is the second book in the Aurora Teagarden series, which is a Hallmark Mystery series.  I enjoyed it and read it in 24 hours!

Shamed by Linda Castillo is the latest book in the Kate Burkholder series, set in Ohio Amish country.  The lead character, Kate Burkholder, is the Sheriff in a county where the majority of residents are Amish.  She is in a unique position, because she was raised Amish, but left the Order when she was 18.  You could probably read these out of order, but I highly recommend the whole series.  I read this one also in 24 hours! I had high hopes for a huge March reading month.  Because the first two books were finished in the first two days.  It quickly went down hill!!!

The Murder at the Vicarage is Agatha Christie's first Miss Marple mystery.  It could not hold my attention.   I should have just given up on it, but I wanted to finish it and see if it 'picked up" at any point.  I just cannot get engrossed in one of her books.  I keep wanting to try and just haven't  been a huge fan of any of them.  This book is set in a very small village and a church official is murdered.  We are introduced to a host of characters that I kept getting confused with because I couldn't read it in big chunks so I'd forget people/details.

The premise of the mystery is that no shot is heard, everyone hates the guy who was murdered, and everyone could be a suspect.  If only,  it was fast paced. :)

Where the Crawdads Sing was our book club pick.  It was engrossing and I devoured it.  If you haven't gotten on the Crawdads train I'd recommend it.  I waited awhile to read it because every book that people LOOOOOOVE I tend to be like 'uh okay' about!

Kya is the 'Marsh Girl,' the girl who lives by herself in the marsh and so many rumors surround her.  She's accused of a murder and put on trial for her life.  Will the town people who have ignored her and teased her for her whole life treat her fairly?  It was fast paced and a good story.

I did read some articles about the author that made me rethink the story and her integrity.  Here is a link to the Slate piece about it.

We did have a lovely book club discussion about it and we all agreed it was a winner! 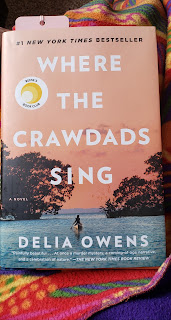 So far in April, I've got 1 book completed (I read most of it in March), and I am liking the other one I'm reading.  But I am the full time mother, teacher, housekeeper, cook, cleaner etc. right now so reading time is given up lots of times for mindless scrolling because I just can't.  And I also started playing Words with Friends again!

What was your favorite read in March?