What I Read in July

July 2019 was probably the biggest reading month of my life.  I read 15 books! I was quite impressed with myself.  I thought I had read about 11 until I counted them up at the end of the month and I was shocked. 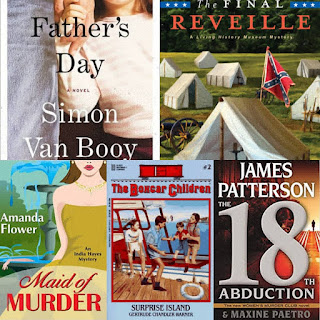 Father's Day by Simon Van Booy is a book that has been on my shelf for a few years.  It was the first book I read in July so it already seems so long ago! It was a cute story about a girl who grows up with her uncle who had a bit of a sketchy background.  It's about how they come together and make their unlikely living situation work for them.

The Final Revielle by Amanda Flower is a cozy mystery about a woman who runs a museum and on the busiest weekend of their summer their largest benefactor's nephew ends up dead on their premises.  In true cozy mystery form, she is a suspect but puts on her Angela Lansbury cap and solves the whodunnit while running her museum.  This is a first in the series and I'm not sure I will continue it.

Maid of Murder by Amanda Flower is the first cozy mystery in the India Hayes series.  It is set in Ohio and India is a reference librarian at a small college.  Her childhood friend is in town for her wedding.  She convinced India to be a bridesmaid, even though they haven't really been friends in years and Olivia's mom hates India and her family.  When Olivia ends up dead, India's brother is the main suspect and she has to prove him innocent.

Surprise Island by Gertrude Chandler Warner is the 2nd Boxcar Children Mystery.  It was simple and nice.  My daughter loved it.  This was the last one I read with her.  She flew through the 4 book boxed set she got last year for Christmas.  We hit up the library for more and we randomly found more in our basement and she has been loving the Boxcar books.  It took some convincing on my part to her that she could read the series out of order.

18th Abduction by James Patterson was the latest installment in the Women's Murder Club series.  I've been so so on this series in the last 8 books or so, but this was a good one.  It starts out in present time and then goes back to a past case and the book spends the majority of the time going over what happened during that case.  Fast paced and kept me interested! 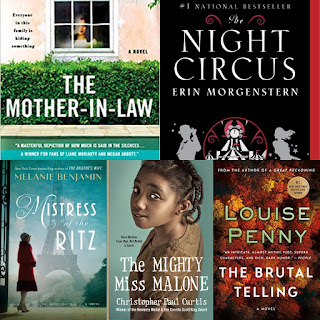 The Mother-In-Law by Sally Hepworth was a great mystery about how well we really know the people in our lives.  It goes back in forth in time and perspective between Lucy (daughter-in-law) and Diana (mother-in-law).  I highly recommend this one, it went super fast.

The Night Circus by Erin Morgenstern was okay.  It was our book club pick for July and I really wasn't excited to pick it up and that feeling never changed.  One, it is really long.  Two, I usually like books that switch time but this was a bit confusing to keep track of because I just wasn't interested and it was hard to keep the timeline straight.  The story was good, but I also think it could have knocked off 50 to 100 pages.

Mistress of The Ritz by Melanie Benjamin was awesome!  I flew through this one.  It is about the American wife of the director of the Ritz during World War II.  It is based on true events/people but highly fictionalized.  Blanche is not what she seems and neither is her husband, neither of them truly trusting the other until it is almost too late.

The Mighty Miss Malone by Christopher Paul Curtis is a middle grade novel set in the Great Depression.  The Malone family lives in Indiana where they are barely hanging by, but they have each other, their morals, and humor.  When a horrible accident changes their lives and makes them move, their adaptability and perseverance are on full display.  It was touches on the racism and prejudices of the time.

The Brutal Telling by Louise Penney is part of the Inspector Gamache series.  This series is always hit or miss with me.  This one was okay.  A stranger was found dead in the woods, but was he a stranger to every one? Not so... 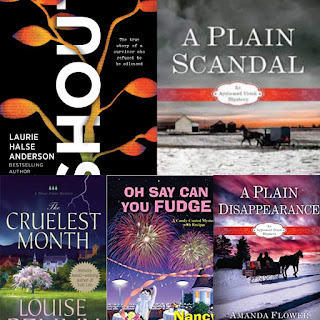 Shout by Laurie Halse Anderson is a poetic memoir that is geared towards young adults but completely on level as an adult reader.  It goes into details about her sexual assault as a teen and is a powerful book for those struggling with emotions dealing with abuse and assault.

A Plain Scandal by Amanda Flower is the second book of her Appleseed Creek series.  Someone is going around cutting the hair of Amish girls and the beards of Amish men, which is a huge disrespect to their faith.  It goes even further when someone ends up dead.  Chloe is of course on the case again and uses her Amish connections to help the police.

The Cruelest Month by Louise Penny is another Inspector Gamache book.  It is set near Easter time and a group of Three Pines village people decide to try to rid the Old Hadley place of the evil inside.  A surprise for them is when one of them dies in the house when they are all together.  Can you die of fright?

Oh Say Can You Fudge by Nancy Coco is part of the Fudge series.  It was quick, funny and a great addition to the series.

A Plain Disappearance by Amanda Flower is the 3rd book in the Appleseed Creek series.  It's now Christmas time and she and her boyfriend find a dead body on their first date.  This of course gets her into the investigation but with the blessing of the police chief for once.

Going over the books I read this month definitely highlights by love of series and my current readings of many cozy mysteries! I need a break though because they can get annoyingly predictable.

I officially hit my 52 books over the month and I'm now close to 60 books read this year.

My child has been flying through books as well and her favorites are the Dork Diaries series and the Boxcar children currently.

I am reading The Truth About Forever by Sarah Dessen currently and have a stack of library books to pick from when I am done.

What was your favorite book read in July? Any suggestions for me?
Posted by The Many Thoughts of a Reader at Tuesday, August 06, 2019