Half of 2019 has gone by and with it, I've completed 42 books! In June I read 9 books.  I really enjoyed the majority of the books I read.  I started a book mid-month that I abandoned for awhile, I may go back to it, but it just wasn't what I wanted at the moment and instead I picked up 3 books in the Fudge series by Nancy Coco that is set on Mackinac Island.  I read one of the books last October, and decided it was just what I needed. 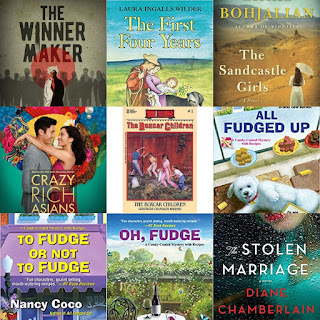 The Winner Maker by Jeff Bond was a book that took me awhile to get into and is Bond's debut novel.  I think there was a lot of things going on and it was just okay for me.  It was good in a mystery sense, but I just wasn't feeling it.

The First Four Years by Laura Ingalls Wilder was a book that was put together after Ms. Wilder had passed away.  It doesn't read like the others in the series and is very short.  They only fixed spelling and some grammar issues from my understanding.  So it's kind of written more towards an older audience than the younger audience the rest of the series is aimed at.

The Sandcastle Girls by Chris Bohjalian was a very good book.  It switched perspectives a lot.  I also think it could have used a different title.  However, it's a story of 1915 Syria and the Armenian genocide that occurred. I do recommend this, but it is not a light read at all!

Crazy Rich Asians by Kevin Kwan was hysterical.  I loved it.  I really could see how this easily became a movie and I'm actually contemplating trying to see it this summer.  It's kind of lengthy but it reads super fast.

The Boxcar Children by Gertrude Warner was one of my favorite books as a child.  I loved this series! My kiddo got a boxed set of the first four or five books and we decided we'd read this one together.  She loved it.  We read it in like 2 hours.  We also found out there are now Boxcar movies??? We watched the second one on Amazon Prime.  We also immediately started reading the second in the series but I think I am going to encourage her to do the rest on her own!

All Fudged Up by Nancy Coco is the first in a series set on Mackinac Island.  These books can definitely be read out of order and I had already read one of them months ago.  Allie McMurphy inherits the family hotel from her Grandpa Liam and is trying to renovate and get ready for the season on the island when she finds a dead body.  Of course she becomes a suspect and she of course has to clear her name.  I loved the setting of Mackinac Island and how quick and fun this book was.  Plus, I love the fudge recipes included!

To Fudge or Not to Fudge by Nancy Coco is the second book in the series and this time Allie's dog finds bones of a dead body and she is part of another murder investigation on the Island.  This happens during the Island's Lilac Festival and included more yummy fudge recipes.

Oh, Fudge by Nancy Coco is actually the fifth book in the series but my library didn't have 3 or 4 so I just grabbed this one.  Like I said, you don't really need them in order.  Once again Allie finds a dead body, but this time she finds her cousin standing over the body and her cousin becomes the suspect. 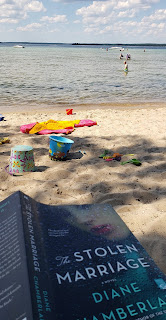 The Stolen Marriage by Diane Chamberlain is set in 1944.  Tess DeMello finds herself pregnant with not her fiances baby and runs away to North Carolina and marries the father of her child.  Tragedy and heartbreak follow an interesting look at marriage and life in the 1940s.  I don't want to say much because there are a few spoilers that were well placed and made this an engaging read.

I've definitely read a lot of interesting books in the first half of the year.  The one book that stands out as my OMG you must read this too book is Becoming by Michelle Obama. So so so good.

What did you read in June? What one book of June would you recommend? How are you doing on your yearly reading goal?
Posted by The Many Thoughts of a Reader at Monday, July 01, 2019