My parents and I wanted to visit a bigger zoo than what we have 45 minutes from us and with a time crunch on when it could happen we decided on the Potter Park Zoo.  Isla and I had been before for their boo at the zoo and it was bigger and a nice facility so it seemed like a great idea.  Of course the weather showed some signs of rain showers but besides a few tiny drips as we were finished, NOTHING.  The temperature was perfect.  However, the mosquitoes were insane.  I'd highly recommend bug spray if you are planning on going.  OUT OF CONTROL.   I had just spent 8 days in the woods and left the zoo with more mosquito bites!

The first thing we saw when we got there were the sea otters.  They were highly entertaining! They kept swimming by the window and flipping and doing tricks.  It was amusing for the 10 or so kids around at the time.  I've never seen sea otters that active before.  It was awesome! 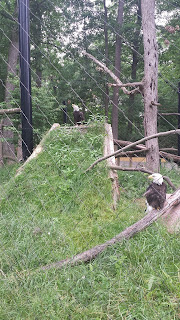 These bald eagles were right next to the sea otters and they kept 'talking' to us.  Isla then made noises at them and they made noises back.  It was really cute and then she kept asking the rest of the time if the other animals could talk! 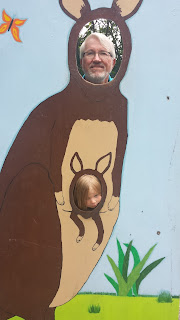 The big Papa Kangaroo and the little baby Isla kangaroo. 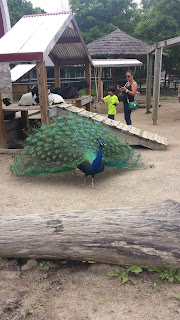 This peacock was gorgeous! I've never seen once so big before! All the peacocks at the zoo were gorgeous and so big! 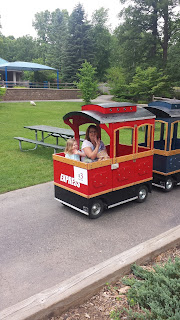 As soon as Isla saw the train she HAD to go on it.  Screw the lions! (3 that were awesome!) She made her Gaga head straight over and the two enjoyed a ride together.  It is a little disappointing as an adult that this is the train ride, but to my 4 year old, it did not matter. ;) 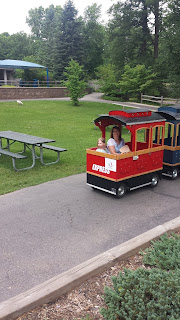 After the train ride she was of course staaaarving so we sat at a bench and she ate an apple for awhile until the mosquitoes were killing us and a bird wandered over and scared my fraidy cat. 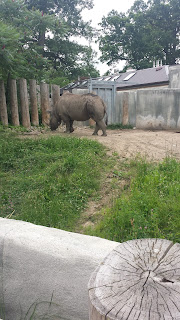 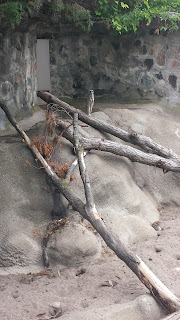 Then we checked out the rhino and the meerkat.  Meerkats are creepy.  I felt they were plotting to jump on our necks and kill us.  Okay, maybe not really but I'm not a big animal person.. mmmkay. 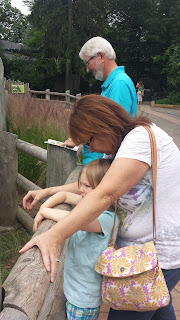 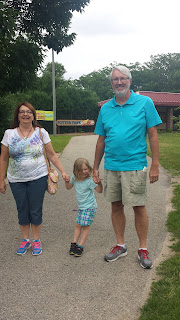 Overall it was a terrific trip, minus the mosquitoes!! Isla's favorite was the American Toad mainly because of the waterfall feature.  She also liked the sea otters, the red panda and the wolf.  My dad's favorite was the rhino.  My mom's favorites were the red panda, lions and sea otters.  My favorites were the lions, red panda and peacocks.  It took us about 2 hours and we could have probably spent a bit more time but mosquitoes and a starrrrving 4 year old.  We left and had a lovely lunch at La Senoritas before heading home.  Perfect summer outing!
Do you like going to zoos? What are your favorite animals to see? What zoo has been your favorite to visit? Do you have memories of going on trips with your grandparents?
Posted by The Many Thoughts of a Reader at Wednesday, July 01, 2015