I know I slacked on my weekly updates but I did want to do one final post to share that I COMPLETED THE CHALLENGE! One mile a day at least for the month of January!

The hardest mile: THE FIRST one of every workout.

Let's just say that after 31 days of walk/running I am so over the treadmill.  All but 3 of my days were on the treadmill.  I've listened to a lot of Pandora, watched 2 episodes of Revenge, 1 play off football game and read many facebook status updates.

Sadly, I can't say that I ever did manage to run a straight mile but I did run for 5 straight minutes at one point.  For some reason my body just really wants to run in increments.   I spent a lot of time doing run 1/walk 1 or run 2/walk 1 combinations.  I also think I'd have a different result on the treadmill.  I loosely followed one week of the Couch to 5k which was like a week 3 or 4 and that seemed just right at the time but I really think for me to run on the treadmill I need to do a lot of random change ups via speed and inclines.  I played a lot of games too.  Like I will run for 30 seconds then walk for the 30 seconds and then run 2 tenths of a mile and then do the 30 second again.

I did appreciate that it helped me move my body a lot more than I have in recent months and I did notice some changes.  Sadly, I only lost 1 pound.  At one point I had lost 3 pounds but then my travel for work and bad eating that week kinda derailed me.  I could see the correlation with my better eating during the week and the effects of bad eating over the weekend.  Plus, my fitbit has helped me track my activity and it is eye opening how much I move during the week and then not at all on the weekend.  I have been not as exhausted on a nightly basis (have not noticed a morning change on this end) so that's good.  A lot of times we worked out as a family so as I was on the treadmill the other two were doing things or playing next to me so I didn't miss out on kid time and didn't have to use my 'free time' after bed time.  I only woke up early twice to work out when I had plans at night.  I spent two late Friday nights on the treadmill hurrying up to get in my mile and steps (WHO AM I???).

I will say the fitbit has definitely influenced me in a positive way and I like it.  I even convinced a coworker to get one too. ;)

For February I am doing a squat challenge. 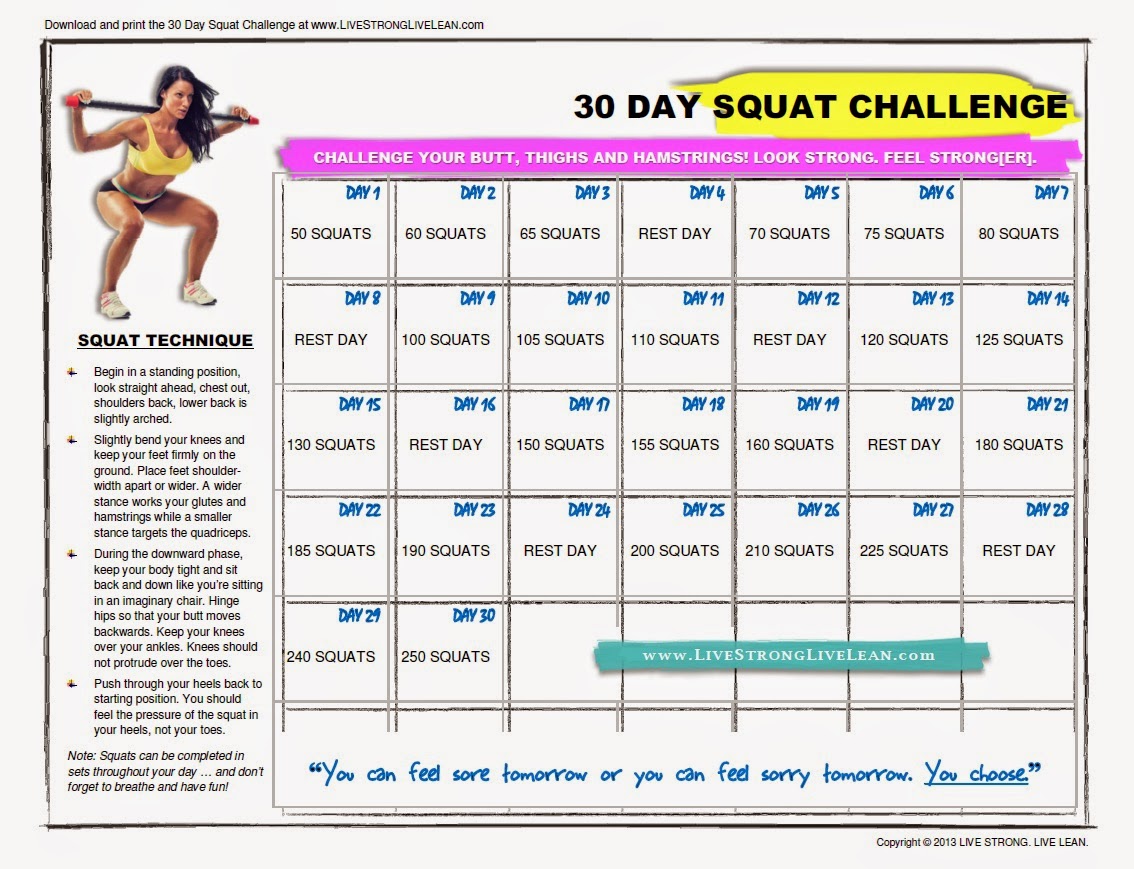 Clearly, February has less than 30 days and that's fine.  I will carry it into March.  I'm also planning on trying out a local gym a friend is going to and raving about their WERQ classes.  They offer a 7 day free trial on classes so I am trying to coordinate with my friend and a coworker on when I'm going to do that to best utilize the 7 free days and try out as many of their classes as I can since many of them sound interesting to me and I wouldn't mind buying a 10 class package if I can actually perform these moves. :P
So, squats, trying out new workout classes, some 30 day shred, and more time on the treadmill are in store for February.  I think I will look at it on a week by week basis to figure out which workouts I'm going to do on which day and to fit around the squat challenge but I don't want to give up the endurance I gained this month and want to keep tracking my mileage in my lovely google doc.  So I will be setting down with my planner and figuring it out on this snowy afternoon.
How many miles did you run in January? What are your workout goals for February? Have you done a mile a day challenge before? Have you done a squat challenge?  How do you plan out your workouts? What is your favorite workout class? Any recommendations for workouts?﻿
Posted by The Many Thoughts of a Reader at Sunday, February 01, 2015