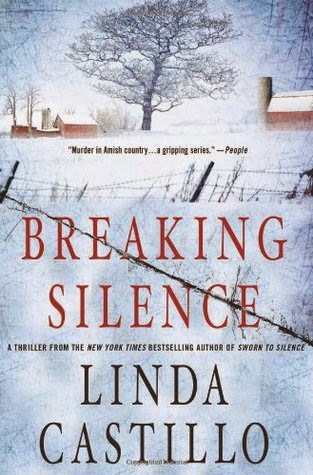 It's been awhile since I read a book in the Kate Burkholder series by Linda Castillo and I really don't know how that happened.  I do vaguely remember attempting to check this book out from the library and it not being there but it's been awhile since I did that.  However, I did make sure to include it on my Christmas Wish List and my husband did not disappoint on that gift. Now I just need the other THREE and a half (ha love when there is a .5 in a series!) to be at my house like yesterday.  Seriously, I read this one in less than 12 hours with multiple interruptions.  I mean I do have a three year old and a house that apparently I am only motivated to purge and clean and update in December and January.

Description:
Police Chief Kate Burkholder is called to the scene of a horrific tragedy on a peaceful Amish farm.
The Slabaugh family are model Amish farmers, prosperous and hardworking, with four children and a happy extended family. When the parents and an uncle are found dead in their barn, it appears to be a gruesome accident: methane gas asphyxiation caused by a poorly ventilated cesspit. But in the course of a routine autopsy, the coroner discovers that one of the victims suffered a head wound before death—clearly, foul play was involved. But who would want to make orphans of the Slabaughs’ children? And is this murder somehow related to a recent string of shocking hate crimes against the Amish?
Having grown up Amish, Kate is determined to bring the killer to justice. Because the other series of attacks are designated hate crimes, the state sends in agent John Tomasetti, with whom Kate has a long and complex relationship. Together, they search for the link between the crimes—and uncover a dark secret at work beneath the placid surface of this idyllic Amish community.

Sometimes when I read these types of books I don't pay any attention and am promptly surprised at the end because I paid zero attention to the clues dropped in.  This time, I paid attention and was rewarded and yet still surprised as to who could have possibly been behind the murders.  That's just the way I like it.

I also like that it is small town Ohio and references things I recognize.  I also like that this series incorporates a lot about the Amish in the area.  I've always been fascinated by the Amish and we have quite a big population north of us that are Amish.  They sell things at our farmers market and there is an Amish store near us that is quite fun to visit.

I like Kate's character and I like the way Castillo writes.  Quick, not lots of random crap thrown in and a mystery.  Characters you care about and action that isn't stupid.  Winner winner!  My only complaint was the few times Kate got retrospective on her crappy past but that was just a wee bit and she covered more ground in her growing relationship with Tomasetti.  Overall a very quick and entertaining mystery for a Sunday afternoon. ;)

Have you read any books by Linda Castillo? Do you have an Amish population by you?
Posted by The Many Thoughts of a Reader at Monday, December 29, 2014