Now, if I was a food blogger or one that routinely shares photos, I would have captured pictures of the awesome food I ate in my travels, but, I'm not so you get some links, some info and a few pictures of my kid. ;)

We left on Friday around 12:30 and neither my husband nor I had eaten lunch but my daughter fell asleep right away and slept for 5 straight hours that day, so we didn't want to stop.  We did briefly stop about 4 1/2 hours in because we needed to use the bathroom and were hungry.  So we stopped at a Culvers somewhere in Indiana.  I was not really impressed with the bathroom there nor was I with the people who were working there who saw us (the only people in the restaurant) standing at the counter and ignored us for 5 minutes.  We got a large order of cheese curds to share on the road and they were yummy.

We spent that night in Franklin, Indiana with a cousin who made us a yummy dinner of steak, roasted veggies, crusty bread and beer! Yum.  We also did a bourbon tasting with him that night and watched MSU and UofM win.  And then immediately crashed.  We ALL slept in until 9:15 the next morning, whoops.  But we hit up Ann's Restaurant in Franklin.  It was packed.  And we all really enjoyed our food.  Mine took longer to get (all of it took awhile but mine longer) so I got 10 percent off my sausage, eggs and toast breakfast.  The pancakes were AMAZING and my husband really liked his omelet.  The French toast also looked amazing and I'd get that if I am ever back.

From there we headed to Nashville and got in around 4ish.  We hit up some honky tonks to listen to live music and it went a lot better than I envisioned with a 2.5 year old!  We went to Second Fiddle and Layla's and enjoyed some really good live music and some Yeunglings! And Isla enjoyed dancing to the music.  Then we hit up Margaritaville for dinner since it appeared to be a quick wait and child friendly.  Which, it was on both accounts.  Isla got a balloon hat that she adored until it popped a day later in Alabama and we all three split the Volcano Nachos for dinner and they were delicious! 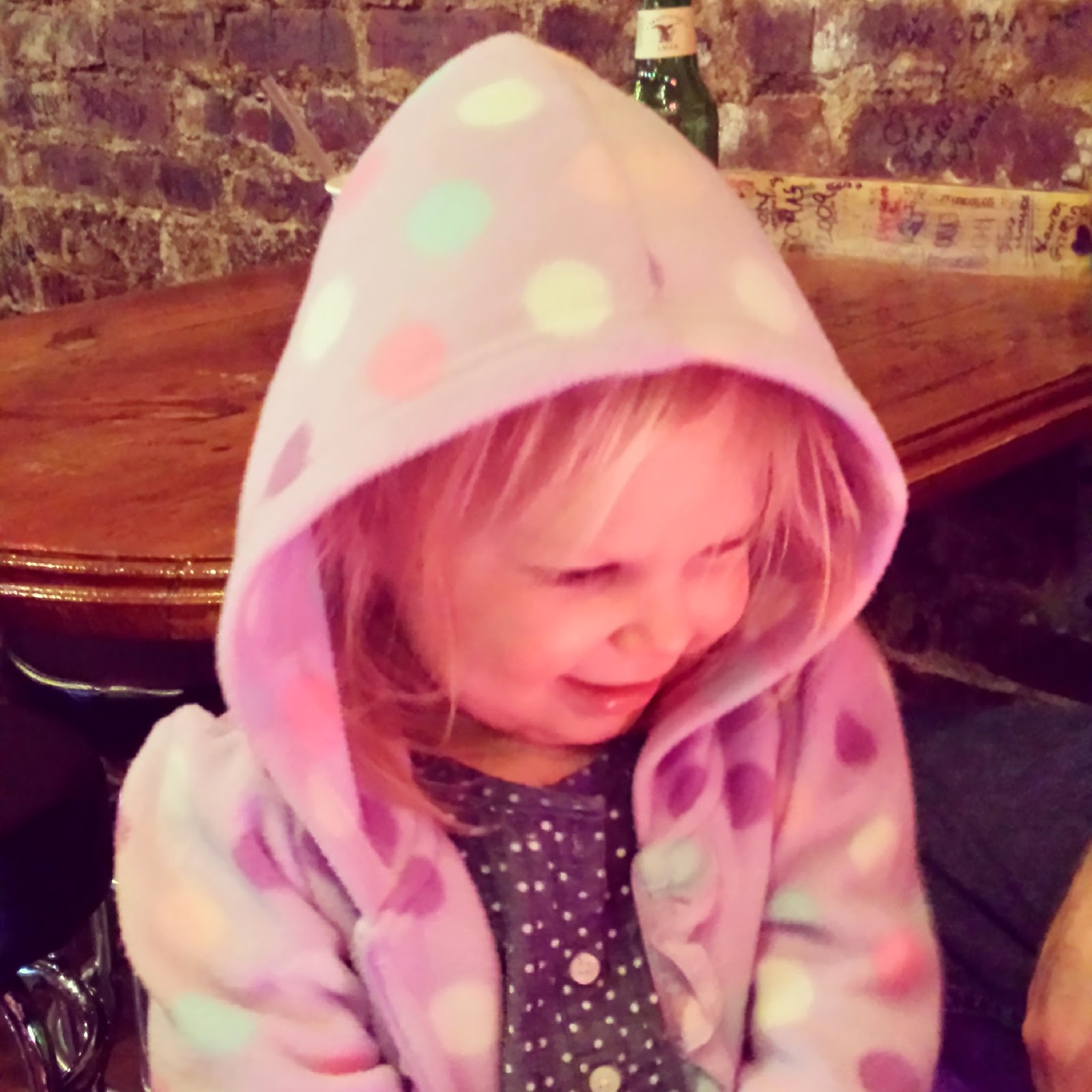 Second Fiddle in Nashville
Sunday we stopped in Birmingham, Alabama at Dreamland BBQ.  It was delicious! I had a pulled pork sandwich with a side of mac and cheese and my husband had ribs and a side of beans.  I really enjoyed the sandwich and the large sweet tea I drank with it. ;) It was very quick service which was great with a two year old and then when we walked outside we noticed a park across the street so we played there for about 15 minutes before we hit the road again. 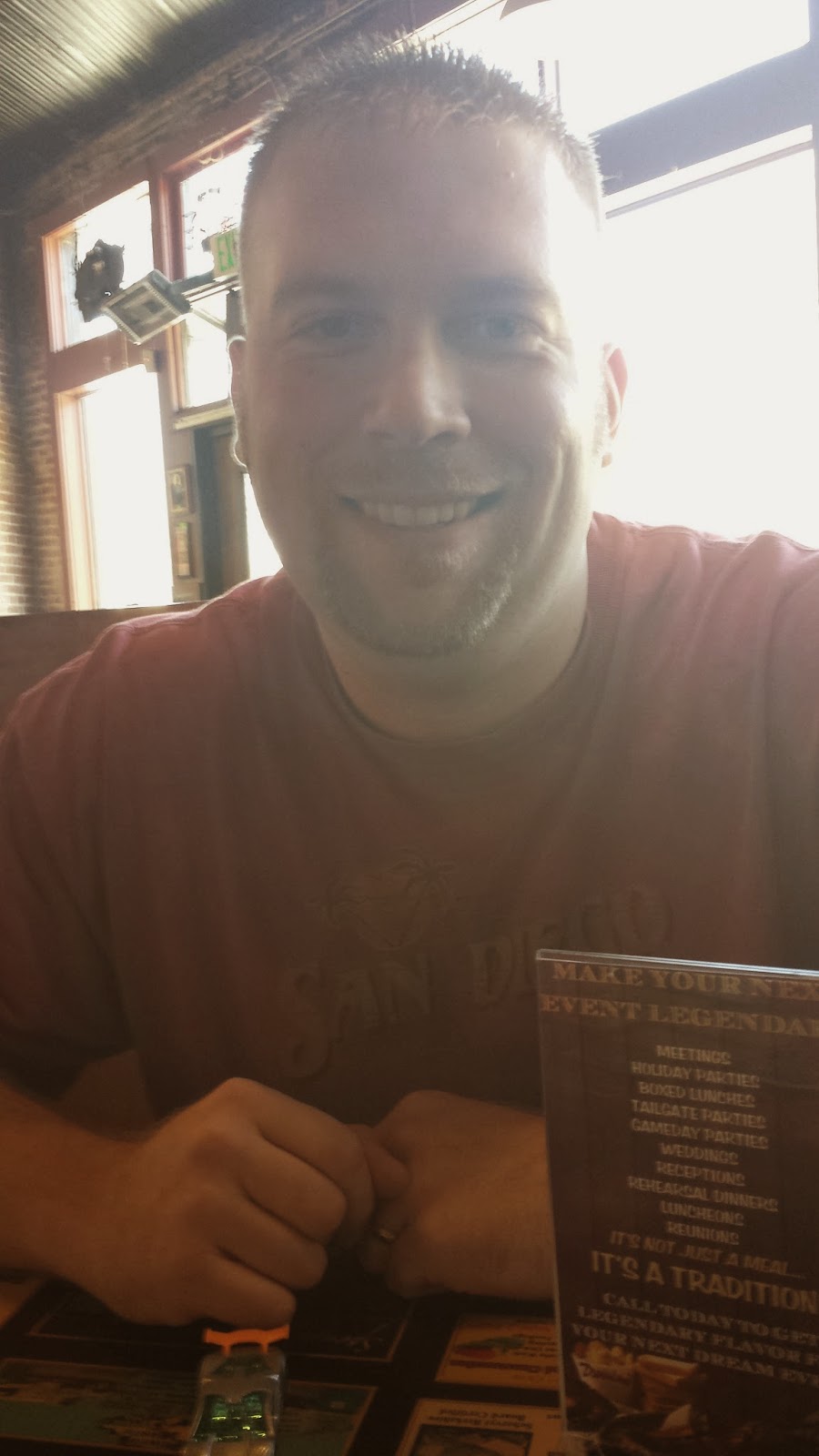 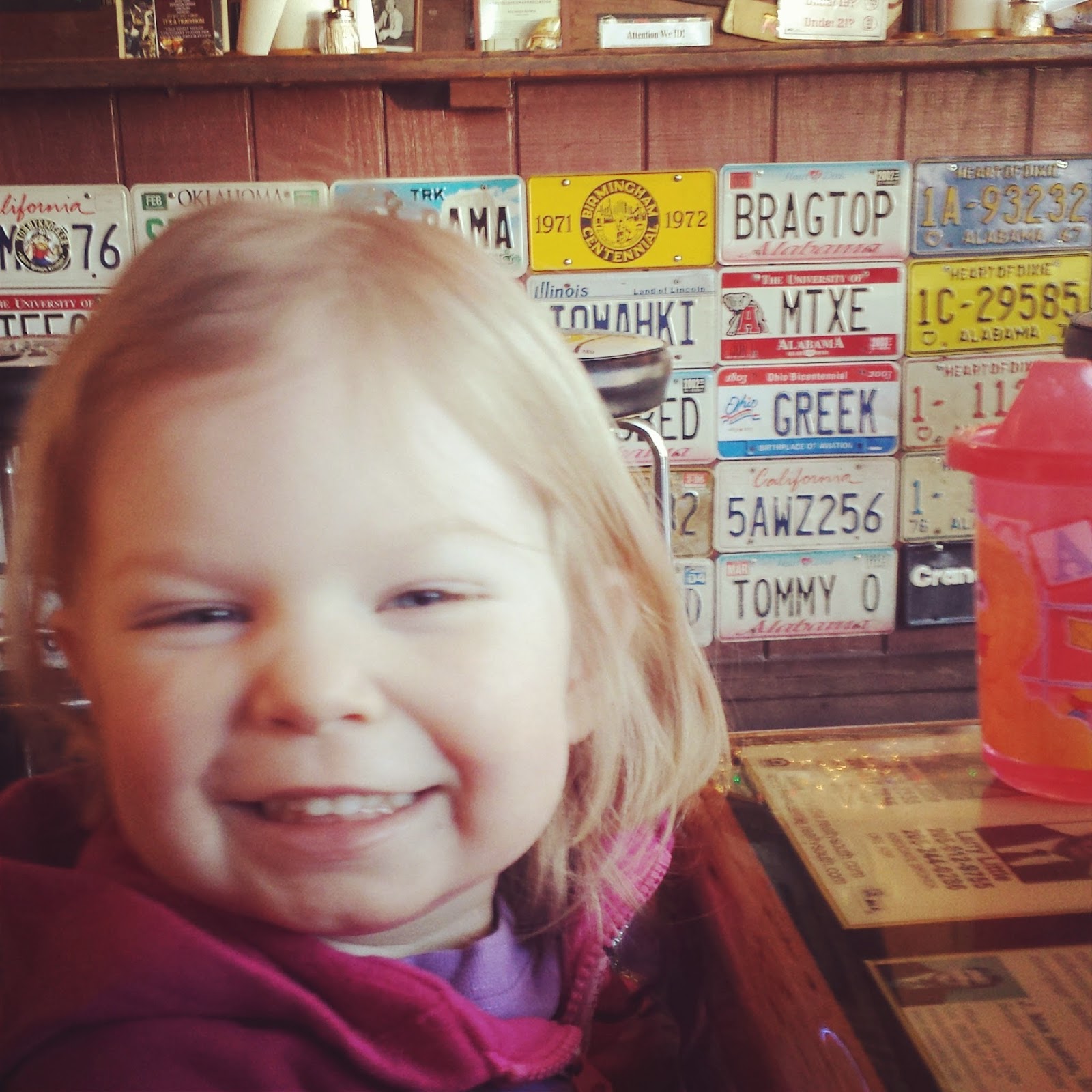 ﻿
Both of my loves enjoying lunch at Dreamland BBQ
That night we stopped in Opp, Alabama which we affectionately have been calling O P P since we found the hotel in January.  My husband and researched some places he wanted to try and besides our google directions being wrong, it was easy to find on the main stretch.  Sadly, a few of the places we had wanted to try were no longer open.  We ended up eating at B&B Family Restaurant.  It was a dive.  But we love dives.  Very small town feel and a lot of locals in when we were there.  My husband said it was the best fried chicken he ever had and I most say it was very juicy when I tried a bite and his meal had a TON of food.  I got shrimp stuffed with jalapenos and cheese and it was delicious.  The chicken breast smothered in cheese that came with my meal was very overdone and I didn't eat it.  The inside of the restaurant was a little scary but it was a good experience.
We only went out to eat twice in Panama City Beach and the rest of the time we ate at our beach house.  Which was good and bad.  There were soo many places I wish I could have checked out and should have adjusted to do so, but eh, you learn these things.
Captain Andersons was a recommended place for seafood and I ended up being a little disappointed.  The prices were a bit much and my meal was a disappointment, my husband's was just so so and my friends with the grilled grouper was probably the best at our table.  The rolls were good and our waiter was awesome.  Probably should have checked out some of the 'divey' looking places since we probably would have enjoyed them more. 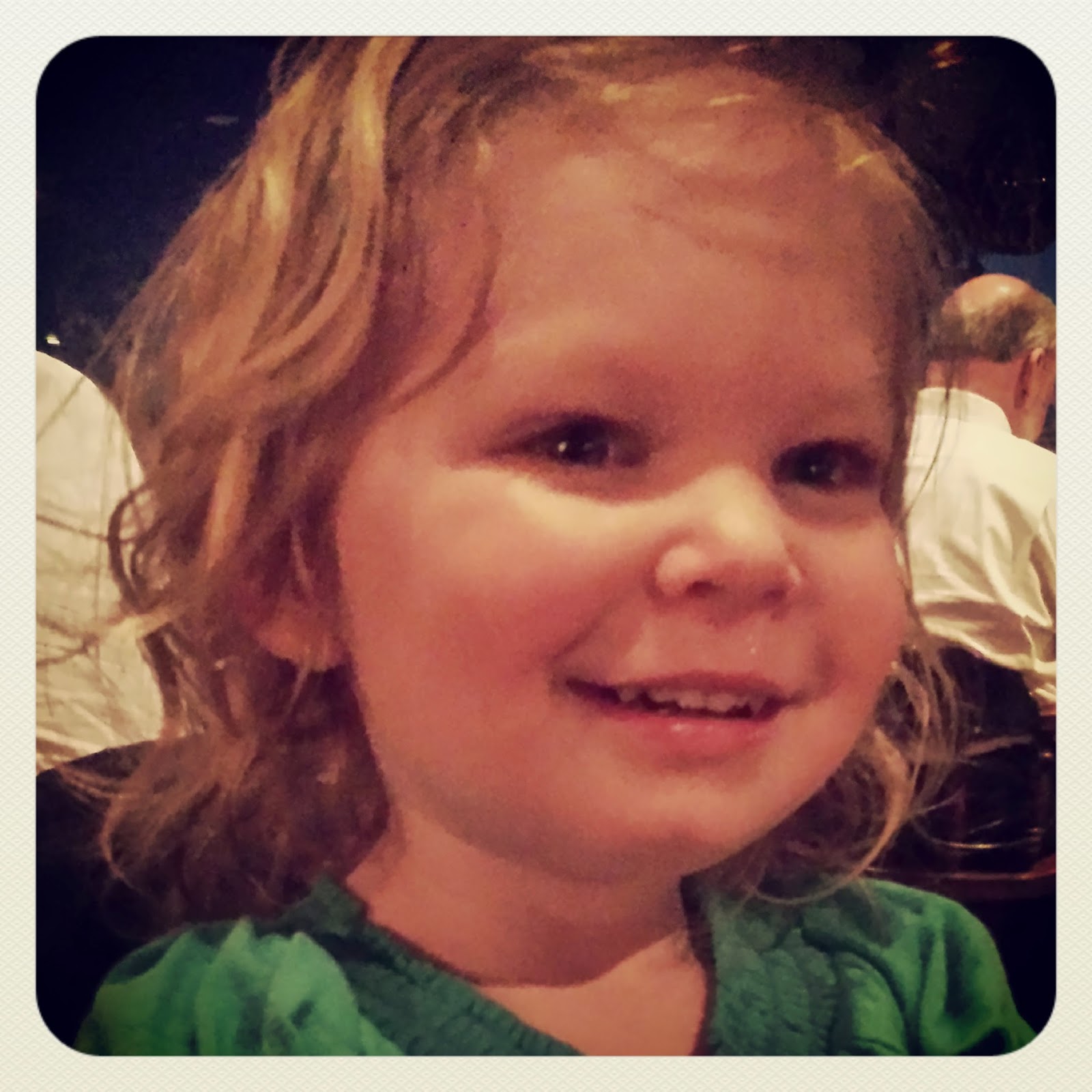 ﻿
At Captain Anderson's
Thanks to restaurants.com our other meal was picked.  Time Out's Sports Bar.  Talk about divey.  We pulled up and it was attached to a gas station.  However, when you got inside, you'd never know.  And I've ate in other restaurants INSIDE gas stations and this was probably the best of them.  You probably wonder where I eat, but when you travel, you try random things. ha.  So,we got a coupon from restraunts.com so we checked it out.  I got grilled fish tacos which were AWESOME and my husband got chicken tenders that he liked.  I got onion rings but eh, they weren't that great.  Yummy yuengling and their children's meals come with a small ice cream cup.
Milk And Honey Frozen Yogurt was a good after dinner stop.  Every vacation needs ice cream/frozen yogurt! Isla and I really enjoyed the sea salt caramel yogurt mixed with pecan praline.  Yum.  And of course a ton of toppings.  I used yelp and got a 25 percent off coupon for checking in.
We planned on driving straight through but about 8:30 Friday night after driving for about 12 hours we decided that we could make it to Indiana but were fading fast.  And we hit one lane traffic for awhile so we found a hotel on hotels.com and booked it and got points. (GOT TO LOVE TECHNOLOGY AND TRAVELING!) It just happened to be in the town I have an old family friend so I texted with him and got a recommendation for pick up pizza.  Bearno's Pizza was delicious!  We ate it in our hotel room and yum, it was good.
We finished out our vacation in Marshall, Michigan and enjoyed Charlie's Grill & BBQ.   We split a three meat platter with two sides.  So we got to try the brisket (blah), bbq chicken (decent) and the bbq chicken (yum!).  I'm glad I talked my husband into the chicken because it was my favorite.  The rub on it was great and I loved dipping it into their bbq sauce.  The mac and cheese was super cheesy and I wasn't really a fan after the first couple of bites but my kid who doesn't normally eat mac and cheese ate it up! Their corn muffin's were excellent and the baked beans were good.  Definitely beat a random chain for a quick lunch.
Overall, we ate very well. I'm so glad we had our smartphones to help plot out better stops along the way than the typical fast food since we tried planning ahead of time but there were toooo many choices.  So we basically went with yelp reviews when we got closer.
Do you research places to eat before vacations? Do you just drive until a sign sparks your interest? How do you pick?
﻿
﻿
Posted by The Many Thoughts of a Reader at Wednesday, April 09, 2014