November Reads! 5 of the 8 I read I gave 5 stars.  It was a really good reading month. 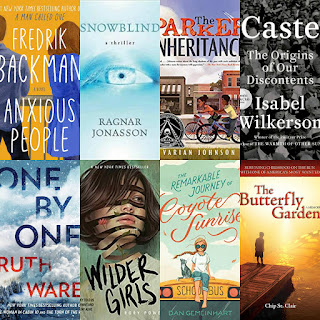 Anxious People by Fredrik Backman was a page turner.  I love Backman’s humor in his writing.  If you haven’t read any of his books, I’d recommend starting with Beartown and then go from there.  I haven’t been disappointed yet, and I haven’t finished all of them.  He also has really good insight on human nature and I find myself nodding along to his wisdom sprinkled throughout.

Caste: Origins of our Discontent by Isabel WIlkerson is the history book you need.  She lays out how race in America is a caste system and compares it to the Indian caste system.  There are a lot of truth bombs in here and history, you probably did not learn in school.  It also spells it out for anyone that hasn’t realized that America treats black people worse than how the Nazi’s treated the Jews.  FOR HUNDREDS OF YEARS.  The Nazi’s deemed some ways Americans legally treated black people AS TOO STRICT.  Also know that the murder of Jewish people WAS HORRENDOUS AND AWFUL AND SHOULD NEVER BE FORGOTTEN OR DIMINISHED.  People are terrible. 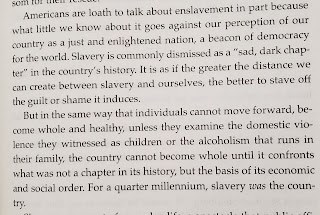 The Parker Inheritance is a middle grade novel that both the 9 year old and me devoured and loved.  It is so much fun to discuss books with your kid, let me tell you! Candice spends the summer at her grandma’s old house and finds out a family secret.  She and her new friend spend the summer solving this puzzle in secret, learning of the towns racist past and trying to salvage his grandma's tattered reputation.

The Remarkable Journey of Coyote Sunrise is also a page turner that YOU HAVE TO PICK UP.  Also middle grade, and the 9 year old also high recommends.  Coyote and Rodeo travel the United States on their 2003 school bus and decide destinations on whims and where the road takes you.  They meet an incredible cast of travelers as Coyote hurries Rodeo across the country on a time sensitive secret mission.

One by One by Ruth Ware is ALSO a page turner.  This was my first book by Ruth Ware and it will not be my last! A tech company takes a group trip to a posh chalet in the mountains.  All is not well and one by one, they die.  Who in the group is the murderer? How can they get help? Will time run out? Small clues throughout made it fun for me to guess who did it!

Snow Blind is a the first in a series of a new police officer in Iceland. I saw the prefer of the newest of the series and it sounded interesting so I picked this one up first. It was okay. I'm not sure I will continue on. I probably will just to see if the second book shakes off some of the first book ehs.

The Butterfly Garden by Chip St Clair is Chip's memoir about growing up on the run with his father who was a child murderer. He had an awful childhood full of abuse and terrible parents. He had no idea they moved so much because his dad was a killer. It took until he was an adult with a steady relationship with a very helpful woman that he is able to step back and figure things out. It was an interesting story, and a very quick read.

Wilder Girls is a young adult novel about an all girls school that is overtaken by "The Tox." and all the occupants of the school are put into quarartine. Maybe not the best time to read this one, but it was a quick read and talked about the different effects the Tox had on the girls on the island, the animals and the plant life.

What books did you read in November that you’d recommend?

Posted by The Many Thoughts of a Reader at Tuesday, December 01, 2020