I cannot believe it is already the end of the first week of February 2020.  January did seem pretty long but the first week of February has flown by.  Adeline has her second cold and has been hacking and snotting for a week, followed by her second round of shots.  Oddly enough, she was sick for her 2 month shots too. Poor kid.  Sleep had been getting better and then this illness has got it back to being so random.  We had naps going in her crib and then the snot and laying flat was not good.  So back to all sleep in our bedroom.  Oh well, it will get there. 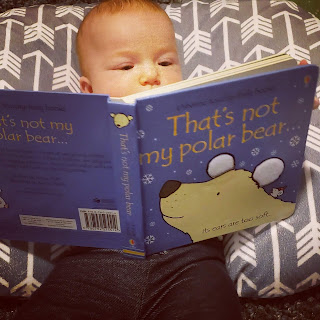 The high of my week was getting 3 straight hours of sleep twice in one night. :)

The low of my week was both of my kids not feeling well and the sadness of shots.

The best money I spent was on Where the Crawdads Sing by Delia Owens for March's book club.

What I’m listening to back logs of Case Closed and Atlanta Monster.

What I’m reading: The Little Women Letters by Gabrielle Donnelly

My plans for the weekend include hopefully finally having a dinner with friends that has been rescheduled multiple times since December 26th!

What are you watching/reading/listening to?
Posted by The Many Thoughts of a Reader at Friday, February 07, 2020