Our weather forecast the other day made it seem like we were going to get a huge snow storm and may get some snow days this week.  So I put in some requests at the library and picked them up before the storm hit. 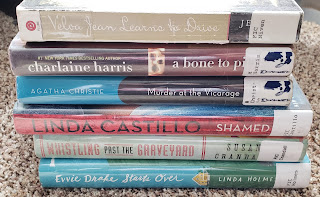 After I finished a re-read of Saving CeeCee Honeycutt by Beth Hoffman, which I still LOVE THE CRAP out of I went through goodreads to find some books that they deem you may like if you liked reading that book.  That got me Velva Jean learns to Drive.  It is the first in a series and is set in Appalachia right before WWII.

I also got Whistling Past the Graveyard based upon this recommendation, and it is set in 1963 Mississippi.

"The summer of 1963 begins like any other for nine-year-old Starla Claudelle. Born to teenage parents in Mississippi, Starla is being raised by a strict paternal grandmother, Mamie, whose worst fear is that Starla will turn out like her mother. Starla hasn’t seen her momma since she was three, but is convinced that her mother will keep her promise to take Starla and her daddy to Nashville, where her mother hopes to become a famous singer—and that one day her family will be whole and perfect.
When Starla is grounded on the Fourth of July, she sneaks out to see the parade. After getting caught, Starla’s fear that Mamie will make good on her threats and send her to reform school cause her to panic and run away from home. Once out in the country, Starla is offered a ride by a black woman, Eula, who is traveling with a white baby. She happily accepts a ride, with the ultimate goal of reaching her mother in Nashville.As the two unlikely companions make their long and sometimes dangerous journey, Starla’s eyes are opened to the harsh realities of 1963 southern segregation. Through talks with Eula, reconnecting with her parents, and encountering a series of surprising misadventures, Starla learns to let go of long-held dreams and realizes family is forged from those who will sacrifice all for you, no matter if bound by blood or by the heart."

A Bone to Pick is the second in the Aurora Teagarden series.  I got an Agatha Christie, because I do enjoy her mysteries every now and then.  Shamed, is the lastest book in the Kate Burkholder series, which is set in Ohio Amish country and Evvie Drake Starts Over is written by Linda Holmes who is a host for NPR Pop Culture Happy Hour.  I've been wanting to check this book out for awhile!

Have you read any of these books? Which book should I start with after I finish my current read which is A Place Called Jubilee?


Posted by The Many Thoughts of a Reader at Thursday, February 27, 2020