What I Read in September

My September reading total fell back to a 'normal' level of 6 books read.  I just wasn't in a reading mood this month.  I spent way more time scrolling the internet and reading articles than reading books.  My brain wasn't in to it.  Also, I just couldn't handle any books that weren't 'lighter' material, which is odd for me. 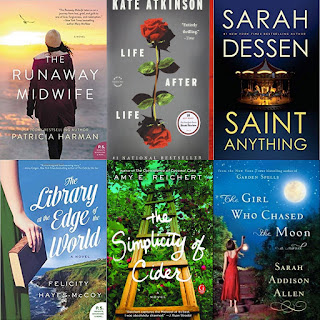 The Runaway Midwife by Patricia Harman is the second book I've read by her.  This is not part of her Hope River series, it's a standalone.    It was set on a small island in Lake Erie.  Clara Perry, a midwife, is hit with a lot of life issues at once and runs away under an assumed name and all of her husband's savings to this island to start fresh.  She runs into a few issues, like she left behind her passport and she had to sneak into Canada.  She tells people she is writing a book, but the most she writes is about the different birds she notices around the island.  It's a cute story, with a hint of thriller but very very tame.

Life After Life by Kate Atkinson was a book I had picked up at a used book sale and our book club picked for the October book.  It was a bit on the longer side, but it was fascinating.  Ursula Todd is born and dies on the same day.  This happens over and over again over the span of a lifetime.  It's almost like how a 'choose your own adventure' could turn out, but well written and well developed.

Saint Anything by Sarah Dessen is yet another brilliant young adult novel that I read very quickly.  Sydney's brother Peyton, is currently incarcerated and it has affected her entire life.  But, since she's so good she has become the family after thought.  Until of course she messes up one time and then is front and center in her mom's bulls eye.  I did struggle with the one character that is a friend of her brother's who is a recovering addict/questionable choice maker and her parents just let him hang out with her and put him in charge of her and there is such a creepy vibe from him that I just was like PARENTS, WAKE UP.

The Library at the Edge of the World by Felicity Hayes- McCoy was a little different than what I thought it was going to be about, but it was still a quick light read.  I thought it would have focused more on the librarian and her travels around the peninsula as a librarian but it was more focused on her personally and the local politics of the small town she grew up in.

The Simplicity of Cider by Amy Reichert is set in Door County, Wisconsin, which when I stumbled upon it at the library, is the main reason I picked it up.  Plus, it was about life on the orchard making hard cider.  YES, PLEASE.  The book has some 'magical' aspects which reminded me of a Sarah Addison Allen book.  The orchard is 5th generation owned and is struggling.  However, Sanna, is hoping to sell her cider and save the orchard.  There is a lot of family drama involved with a sweet love story.

The Girl Who Chased the Moon by Sarah Addison Allen is set in the town of Mullaby, North Carolina, which is a quirky town where lots of interesting people live and strange happenings are overlooked.  Emily Benedict moves in with her giant grandfather, who she didn't even know existed until the recent death of her mom.  She meets a whole cast of quirky town residents who teach her things about her mother that she never would have believed just months before.

I'm currently working The Alice Network by Kate Quinn and then I think I'm going back to some more light reads to get me through the early days of a newborn, whom should be making her entrance in the next week!

What did you read in September? What is a book you are currently recommending?
Posted by The Many Thoughts of a Reader at Tuesday, October 01, 2019