My littlest love is here! We have had this sweet girl in our midst for almost two weeks.  She was born after 16 minutes of pushing and about 2 hours of active labor.  Much quicker than her big sister.  I labored mostly in the shower with hot water spraying on my back and leaning against the wall with pressure being put on my back.  I spent a lot more time standing this time and could feel her moving down.  I also felt like pushing sooner and could feel it working so much better.  I did not have any pain medication and did have some Zofran towards the end because it was going so fast that I kept feeling like I was  going to puke.  Thankfully, I did not.

She was 8 pounds 3 ounces and 20 inches long.  Slightly bigger than her bigger sister but she seems so much smaller.  Her head is definitely smaller and I think that affects my overall judgment of size! When we left the hospital she was 8 pounds 2 ounces and at her doc appointment a couple days later she was 7 pounds 15 ounces but my milk had just come in. She was also up to 21 inches. 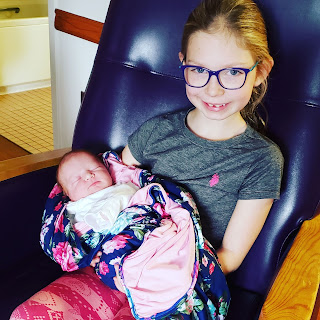 She of course had to have a dramatic entrance.  I was in my zone pushing through contractions and I could feel her coming and to me it felt like she must be so close or almost out, and she was.  But then all of a sudden the room filled and people were yelling at me to push and then all of a sudden she was out and blue.  She wasn’t making any sound and there were so many people in the room.  But then she let out a cry and the next thing I heard from the crowd of nurses around her was, “She has red hair!” And boy does she! The shade changes daily but it is red and growing by the day!

After they got her breathing, we were able to do skin to skin for close to almost 2 hours.  She even latched right away, which is something her sister didn’t do either! So that was a relief.  We had my parents bring the very excited big sister that night to meet her and it was the sweetest thing.  It still is the sweetest thing.  My oldest girl is THE BEST.  We are all struggling with some sleep issues at the moment, but when it comes to her sister she is the best.  She wants to hold her, she asks if she missed her, she will do anything if it’s for her Adeline.  And for that, I feel like I’m winning parenting.

We were supposed to stay in the hospital for 2 nights because I was positive for group b strep, but they are changing the protocol on that and we got an on call pediatrician who let us leave shortly after 7pm on Saturday.  It helped that our nurse was my husband’s cousin’s wife and my midwife is my husband’s aunt.  They vouched we were smart enough to seek help if needed.  The first night home was rough and we’ve had some rough patches here and there, mostly dealing with some ridiculous gas issues, things have been good.  I notice I have a lot more patience and feel a hell of a lot better than I did the first time.  Probably, because I’m constantly not worried about my kids nursing habits.

My husband has been off since the day she was born and he goes back to work next Monday.  I’m kind of scared how we will all get out the door and how we will get through school pick up, but we got this.  And if we don’t, we will call grandma and grandpa!

Posted by The Many Thoughts of a Reader at Thursday, October 17, 2019