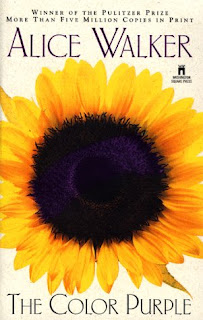 I am not going to post a separate review for this book but I will share some of my thoughts.

I thought it was a well-written novel and discussed some very unpleasant subject matters and it pulled on your heart-strings. I enjoyed reading it and would recommend it to other people.

I enjoyed reading about Nettie's experiences in Africa and I liked the book more after Shug took an active role. The beginning parts kind of just blended together and I am having a hard time remembering how it began. Which may be why, it took me awhile to get my head wrapped around the 'true' story of Celie and Nettie's dad and how that all fit together and what not. It seemed a bit of a stretch but stranger things have happened. I think my favorite character was Shug, followed by Celie. Sofia was pretty darn funny and strong as well.

About: Celie is a poor black woman whose letters tell the story of 20 years of her life, beginning at age 14 when she is being abused and raped by her father and attempting to protect her sister from the same fate, and continuing over the course of her marriage to "Mister," a brutal man who terrorizes her. Celie eventually learns that her abusive husband has been keeping her sister's letters from her and the rage she feels, combined with an example of love and independence provided by her close friend Shug, pushes her finally toward an awakening of her creative and loving self. (From the publisher)

Questions
1. What is the effect of not knowing Albert’s last name? In early novels, it was not uncommon for authors to use a blank in place of a character’s name, to create the illusion that the character was someone the reader might know—someone whose identity had to be kept secret. What does it mean that Celie must call her husband Mr. ____? When does she at last begin calling him by his first name?
The leaving the last name blank, irritated me because I don't like blank lines in my reading. I would of course prefer a full name. So I made one up in my head. Mr. Asshat. ;) I think Celie used a blank because she didn't want to write down his real name in her letters to God and in case anyone found them. I believe she didn't call him by his first name until after she found out all the dirt on him and what a douchebag he was to her. Though, I will say reading this book was so hard for me because I could barely concentrate. It was a good book, but I am already having trouble recalling the beginning!
2. Why does Albert tell Harpo to begin beating his wife, Sofia? Why is it so important to Harpo that his wife have no will of her own? Is his relationship with Squeak (Mary Agnes) fulfilling? What do these scenes tell us about the nature of abusive cycles? Is cruelty something that is taught—something that is unnatural? In your opinion, what does it take for someone (male or female) to deserve true respect?
Albert wants him to beat Sofia so she knows she has to obey him. The conversations these guys have about having your wife obey you, make me just cringe and know that I'd kick their ass before I let a finger touch me. Go Sofia! Albert wants Sofia to be obedient and respect him just like he sees Celie doing to Albert. I think in Squeak he finds that person he can dominate and that makes it good for him. I think cruelty is taught, whether it is in person or more today, viewed through tv and video games. I think to have true respect you need to not be demanding, self-righteous and demanding of respect. To earn respect you must show it to other people. Do as you say.
3. Just as Celie grew up being told she was inferior, Shug Avery was always told she was evil. What are your impressions of Shug, from the photo Celie sees early on, to the end of the novel, when Celie and Albert have united in their devotion to Shug? What does Shug teach Celie about being loved, and about finding one’s true self? What price does Sofia pay for being her true self?

4. Why is it difficult for Shug to commit to the people who love her? In what ways does Shug bring both pleasure and heartache to them?

5. Nettie’s life with Corrine and Samuel gives her the first semblance of a healthy family life she has ever known, but Corrine’s jealousy taints this. Only the memory of that crucial early scene, when Celie lays eyes on her daughter at the store, absolves Nettie just before Corrine dies. The Color Purple brims with these intricate turns of plot. List the seemingly minor scenes that turn out to be pivotal in the lives of the characters.

Remember, those who participate and comment are entered to win a copy of the October Group Read which the voting (in the sidebar) will be finished tonight at 7pm. I will announce the winner of the copy of the book Wednesday to give everyone enough time to comment back and forth on here. (Every comment = an entry) If you would like to do a guest post about this book, contact me to win another entry. Thanks for particpating! I always enjoy talking books with you.

[Questions and about source]
Posted by The Many Thoughts of a Reader at Monday, October 04, 2010

So my computer is being fixed until Friday- I stole Eric's but I wont be able to answer every question :)

Basically overall it took me awhile to get into this book but then I liked it. The characters were very interesting to me, especially Shug who's relationship with Mr. ___ confused me. I think she was generally a positive person in the story but also she was not really committing to anyone or anything, which confused the people who loved her... and "committing" in any way to someone's husband is heartbreaking, even if they did have a terrible relationship.

I thought the reason that Mr. ___ didn't get a name was the author's way of saying he was sort of the typical husband, and he could've been anyone. That was just my understanding, could be totally wrong!

It was hard for me to relate to these characters because like you I would punch someone in the face if they treated me like this, but clearly it was a different situation than my own, and when you are a child being raped by your own father, you are bound to react differently to the world around you.

I'm glad I read this book, even though it wasn't exactly uplifting!