Canary in the Coal Mine

The SNL skit  about women and murder shows was definitely written about me and I am so that stereotypical person.  Murder shows, murder podcasts, murder books, I'm there.  I've read that people who have anxiety or fears are drawn to these type of books because you learn what NOT to do.  And I mean, I'm definitely not running up the stairs to get away from a home intruder!

Canary in the Coal Mine by Charles Salzberg is about PI Pete Fortunato who is down on his luck (what PI in history of PI's is living the dream???) is visited by a beautiful woman who wants his help finding her husband.  The whole situation seems off to him, but he does his job and bad thing after bad thing befalls him. 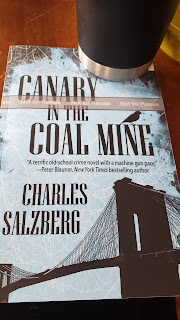 The book is fast paced and untangling the half truths that Pete is told helps the story move quickly.  Pete is a guys guy and the book gave me vibes of David Rosenthal, Jonathan Kellerman or Walter Mosley.

Description: PI Pete Fortunato, half-Italian, half-Jewish, who suffers from anger management issues and insomnia, wakes up one morning with a bad taste in his mouth. This is never a good sign. Working out of a friend’s downtown real estate office, Fortunato, who spent a mysteriously short, forgettable stint as a cop in a small upstate New York town, lives from paycheck to paycheck. So, when a beautiful woman wants to hire him to find her husband, he doesn’t hesitate to say yes. Within a day, Fortunato finds the husband in the apartment of his client’s young, stud lover. He’s been shot once in the head. Case closed. But when his client’s check bounces, and a couple of Albanian gangsters show up outside his building and kidnap him, hoping he’ll lead them to a large sum of money supposedly stolen by the dead man, he begins to realize there’s a good chance he’s been set up to take the fall for the murder and the theft of the money.

In an attempt to get himself out of a jam, Fortunato winds up on a wild ride that takes him down to Texas where he searches for his client’s lover who he suspects has the money and holds the key to solving the murder.
What is your favorite book about a PI?
Mine would probably be the Laura Lippman series about Tess Monaghan.
I received a copy of this book for review.  All thoughts and opinions are my own.
Posted by The Many Thoughts of a Reader at Monday, May 02, 2022