Lowcountry Boondoggle by Susan Boyer is the 9th book of the Liz Talbot series.  I must confess that I have not read the entire series.  I think I’ve read about half of them.  So if you are nervous about picking up a random one in the series, fear not, you can jump right in! 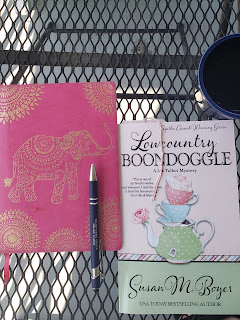 Liz and her husband Nate are private investigators who usually end up solving the cases for her childhood friend Sonny Ravenel, who is a detective in Charleston, SC.   This time they are helping out Darius Baker a recently retired reality tv star, and finding out who killed the eccentric professor, Murray Hamilton.  Murray is the uncle of Tyler Duval, who is business partners with Darius’s son Brantley.  A little confused by the name dropping? I was too at the beginning! Bit of a slow start but it quickly picked up.

Murray is found dead in his house and after an autopsy, they learn he has been poisoned.  Liz and Nate try to find out who would kill Murray.  Is it is nephew wanting an early inheritance? An angry student? A jealous lover? Quite the host of characters are interviewed and assessed by Liz and Nate with the help of Liz’s dead best friend Colleen.  Colleen always hads a bit of comedy into each story.

The book is a very quick read and a delightful trip into the Lowcountry.  Be prepared to get hungry as the delicious food and drinks are described and wistful for old historic houses of Charleston.

If you like Gretchen Archer, Janet Evanovich or Charlaine Harris be sure to throw in a Susan Boyer book in your beach bag on your next trip!


A shocking number of people had reasons to want the genteel, bowtie wearing, tea-drinking professor dead. Was it one of his many girlfriends or a disgruntled student? Or perhaps Murray was killed because his failure to invest meant the hemp farm trio’s dreams were going up in smoke?
Though Liz’s long-dead best friend, Colleen, warns her the stakes are far higher than Liz imagines, she is hellbent on finding the no-good killer among the bevy of suspects. But will the price of justice be more than Liz can bear?


What is your favorite seafood dish? Do you like drinking tea? Do you have any daily rituals?

I received this book for review.  All thoughts and opinions are my own!