Hot and Bothered: a novel by Annie Downey

I read Hot and Bothered yesterday, all of it, yep. It started out a little iffy to me, but I just had to get used to the style it was written. It's almost like blog speak, as if you are reading/hearing the narrator's thoughts. It's definitely a different type of writing style and I found myself really enjoying it. It was super funny, kinda frustrating, and hard to put down. 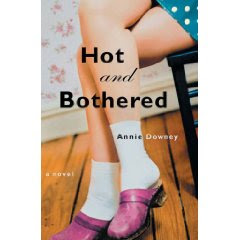 The main character whose name I do not believe is revealed until the very end is a recently divorced woman who hates her ex-husband known as Ex-Rat. He cheated on her for probably their entire marriage and then asked her for a divorce, got engaged to a much younger lady, and is pretty much an ass in general. She has two kids, Brendan and Demon Princess aka Lucy. The discriptions of Demon Princess made me want to smack her and teach the narrartor how to parent. But then you must realize the narrator is depressed and her daughter is dealing with her parent's divorce. Brendan is a typical teenage boy trying to fnd his way, which sometimes means his mother and him disagree, a lot.

The narrator has a lot of funny experiences with men and usually when she is dealing with said men, is when I wanted to throttle her. She is very neurotic and goes through at least two therapists that the reader is aware of. The Christmas day scene at her house where her Ex shows up (sans fiancee who keeps calling), an old crush from Alaska and her Perfect Guy/semi-employer and her hilarious family is quite entertaining.

Her best-friend Pip, could be a story in itself. She is a meat-eater, dominantrix who works for the Bruins and dating a vegan guy 14 years younger than herself.

Basically, this was a hilarious quick read that was quite entertaining. And I got it for $4.98 at B&N!
Posted by The Many Thoughts of a Reader at Tuesday, June 09, 2009

Email ThisBlogThis!Share to TwitterShare to FacebookShare to Pinterest
Labels: books read in june 2009, hot and bothered: a novel